Tuberculosis outbreak reported in the South - The Horn News 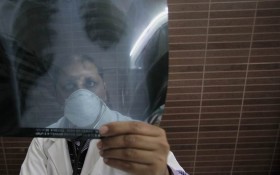 Tuberculosis, a global scourge, has mostly been eradicated in the United States, but minorities and poor people who lack regular health care remain vulnerable.

Marion, the town where Coretta Scott King was raised, is just that kind of community: the seat of Alabama’s poorest county, where 47 percent live in poverty and the per-capita annual income is just $13,000.

Spurred by two tuberculosis deaths last year, Alabama public health officials tried reaching out in Marion, and were mostly ignored or turned away. Many people seemed suspicious and unenthusiastic about providing blood samples to the government. Efforts in late 2014 to trace the contacts of people who did test positive were stymied; few in the town of 3,600 seemed eager to tell on their neighbors.

“We had a very, very poor turnout. Our turnout was so bad, we actually had people throwing beer bottles at us,” said Pam Barrett, director of the Alabama Department of Public Health division for tuberculosis control.

The U.S. Centers for Disease Control and Prevention has long called for targeting the fight against tuberculosis where the disease remains most prevalent, among poor and minority populations. The airborne bacterial infection spreads when people live in unhealthy conditions in close proximity and get little health care. Blacks and Hispanics are eight times more likely to carry it than whites are, according to the CDC.

“While most people think of TB as a disease that does not affect the U.S., Marion, Alabama is experiencing a TB outbreak that is worse than in many developing countries,” the UN Special Envoy on Tuberculosis, Eric P. Goosby, said in a statement Wednesday. “Unfortunately, in many areas of the country, funding for community education and outreach on TB by local health departments is scarce or non-existent.”

The deaths in 2015 and another in 2011 justified a more proactive response. Using grant money from the CDC, the local health department decided to pay $20 to anyone who comes in for a blood test, another $20 for returning three days later to get the result, an additional $20 for keeping an appointment for a chest X-ray if necessary, and $100 if a patient told to take medication completes the treatment.

The cash made all the difference: In the last two weeks, more than 1,000 people — a tenth of Perry County’s residents — have gotten tested, and public health officials found what they feared: an outbreak at a scale unseen in years. The tests showed that 20 people have had the disease since 2014, and 47 others have latent infections. All will now get treatment to reduce the likelihood of spreading the bacteria.

Confirmed cases of tuberculosis disease reached a national low of 9,421 cases in 2014, or 2.96 cases per 100,000 people, according to the CDC. The tests in Marion uncovered an infection rate much higher than state and national norms, said Alabama state health officer Tom Miller.

“We’ve had TB throughout the state here and there, it’s always been very restricted — one or two cases,” Miller said. “But to this magnitude? Not that I’m familiar with.”

Tuberculosis typically attacks the lungs and spreads when a person carrying the bacteria coughs, sneezes, speaks or sings and people nearby inhale the bacteria, according to the CDC. Symptoms include a persistent cough, chest pain, fatigue, weight loss and night sweats. But tuberculosis can live in the body without immediately making a person sick, and people with latent infections can’t spread tuberculosis unless their immune systems fail to control the bacteria.

All the cases in Perry County involve black people, said Barrett, who sought to assuage concerns during a meeting at a local church Tuesday night.

Mary Moore, 47, said she, her relatives and co-workers had been screened by their doctors, but others remain reluctant — a problem she blamed on “people living secret lives, private lives and privacy issues as well.”

Barrett stressed that any results will remain confidential.

“We don’t care if you’re doing illegal activities, we don’t care if you’re having an affair on your husband. We don’t tell any of that to anybody,” Barrett said. “We just need to know who you’ve been around. And the people that we were running across just would not tell us that information.”

The federal grant, which enables the county to keep paying for tests through Jan. 29, has made a big difference, Barrett said.

“I think it has brought a lot of people to be tested that otherwise would not have been tested because they just wanted the money,” Barrett said.

The money is nice, but some said the education people are getting about disease prevention is more valuable.

“I think it’s a gift from God. Because awareness — it’s opening our eyes,” said Rosie Kynard, who tested negative. “We say 47 now but look, they got to test tomorrow. They got to test Friday. How do we know that everyone who comes tomorrow or that comes Friday won’t be positive?”

Despite uncertainty surrounding this outbreak, Kynard and others said that with these tests and their faith, they see little reason to worry.

“No I’m not, not at all,” Maggie Tubbs, 71, said as she left the health department building. “‘Cause we all have something, but we don’t know what we got.”