Heads up, ISIS! US deploys new weapons in fight against Islamic terror - The Horn News 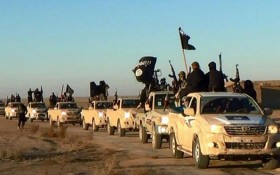 The United States will deploy a rocket launcher system in southeastern Turkey across the border from Syria, officials said Tuesday.

U.S. Maj. Gen. Peter Gersten, deputy commander for the fight against Islamic State militants in Iraq and Syria, said that the mobile, long-range rocket system will be the fourth one deployed around the region.

Speaking from Baghdad to reporters at the Pentagon, Gersten noted that one is in Jordan, another is in Iraq’s Anbar province and another is being deployed to help in the fight to retake the northern Iraqi city of Mosul.

He wouldn’t say where exactly in Turkey the system would be placed, but it could likely be used as the campaign progresses to retake IS de facto capital Raqqa in northern Syria.

“I will tell you that is a recent development that we have been working on, and we are looking at how it’s going to be installed, and we’re working very closely with our strong partners in Turkey to find out exactly how it’s going to operate,” he said.

In an interview with the Haberturk newspaper published on Tuesday, Turkish Foreign Minister Mevlut Cavusoglu said U.S. HIMARS missiles would arrive in May as part of a joint effort to combat IS.

Turkey regularly shells IS targets in northern Syria in response to cross-border rockets, which have hit the Turkish town of Kilis. Turkish shells have a range of approximately 40 kilometers (25 miles) whereas HIMARS missiles can reach targets 90 kilometers (55 miles) away. HIMARS stands for High Mobility Artillery Rocket System.

“In order to clear the area of Daesh, we have to give the moderate opposition both aerial and ground support,” Cavusoglu said, using an alternative acronym for IS.

Clearing the Manbij area would pave the way for the creation of a “safe zone,” he added.

Turkey has long advocated for the creation of a buffer zone in Syria, but failed to get its allies on board.

The nation is part of the U.S.-led coalition against IS and hosts 2.7 million Syrian refugees.