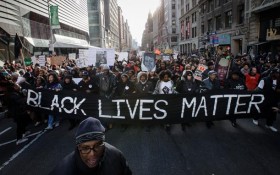 Liberal organizers of Black Lives Matter protests across the country say they’re a peaceful organization that strives for police reform.

But opponents say they’re a violent group based around racial hatred — and the videos below that have emerged out of this weekend’s riots in Milwaukee seem to back that up.

We invite readers to watch the footage and decide for themselves.

#BlackLivesMatter rioters target whites: "They beating up all the white people." #Milwaukee pic.twitter.com/G85jnYtd3k

Another video, first posted on Vessel News, shows a Black Lives Matter supporter yelling at a law enforcement officers, “We are done with that justice for peace shit, we want blood … no more peace … we cannot cohabitate with white people anymore. One of us has to go, black or white!”

Later in the video, the angry confrontation turns violent as protesters smash a police car’s windows.

On social media, the hashtag #MilwaukeeLootCrew went viral, where one thug allegedly bragged about his racist goals and brandished a weapon at the camera.

Riots and looting erupted in the city over the weekend after a police officer shot and killed a black male. On Sunday night, two dozen officers in riot gear confronted protesters who were throwing rocks and other objects at police near where Sylville K. Smith was fatally shot a day earlier.

The city’s police chief said Smith, 23, was shot and killed by a black police officer Saturday afternoon after he turned toward the officer with a gun in his hand. The officer’s identity has not been released. The killing touched off violence that led to the destruction of six businesses on the city’s mostly black north side Saturday night. Wisconsin’s governor put the National Guard on standby to protect against further violence.

Milwaukee Police Chief Ed Flynn said at a press conference earlier Sunday that Smith turned toward an officer with a gun in his hand. Flynn cautioned that the shooting was still under investigation and that authorities were awaiting autopsy results, but that the officer “certainly appeared to be within lawful bounds,” based on video from his body camera.

He said the officer told Smith to drop the gun and he did not do so. It was unclear how many rounds the officer fired. Smith was hit in the chest and arm, Flynn said.