Has Trump made his VP pick? - The Horn News 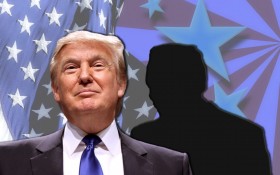 With billionaire Donald Trump pulling away from the pack in the race for the GOP presidential nomination, speculation has already begun about a potential running mate.

And while Trump has so far declined to name names, rumors are circulating that Ohio Gov. John Kasich is angling hard for the job and may be a Trump favorite.

The story has begun circulating in recent days that Kasich, running a distant fourth in the delegate count, is sticking around the 2016 race to increase his national profile with an eye toward the VP nod. Kasich is considered to be siphoning votes from more mainstream Republican candidates like Florida Sen. Marco Rubio, and not Trump.

Rumors starting to circulate that Kasich thinks staying in gets him Trump veep pick by holding back others.

Kasich could also be enormously helpful in delivering Ohio, a traditional battleground state, into Trump’s hands.

The National Review noted in a January article titled, “Trump/Kasich 2016” that at a previous Republican debate, the two were complimentary toward one another on issues like how the U.S. should approach North Korea.

Since reports of Kasich’s interest in the VP job surfaced, Trump has seemingly added to the speculation. In a recent interview Q&A hosted by Pat Robertson at Regent University and broadcast by CNN, Trump indicated he wanted for his vice president “somebody that’s political, because I want to get lots of great legislation we all want passed.”

As a former Congressman, Kasich knows his way around Washington well.

Trump elaborated, “We’re going to probably choose somebody that’s somewhat political,” and when pressed refused to rule out a fellow GOP presidential candidate as the one he has in mind.

“Some of the people I’ve dealt with, I have a lot of respect for,” Trump said.

The Political Insider reported Tuesday that the move would make a lot of political sense, saying the two candidates “agree on many issues and Kasich has a different style that can win over certain Republican demographics, too. His standing as a governor who just easily won re-election in a key swing-state for the general election means Kasich is likely the choice.”

A good indicator of whether Trump and Kasich are playing for the same team should come during tonight’s debate. Look for them to team up on Rubio, Trump’s closest GOP rival.