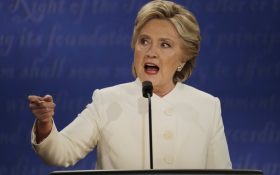 Everything old could be new again during the 2024 presidential election, according to some seasoned political observers.

And rather than seeing newer, younger faces enter the fray, it could turn into a battle between two very familiar candidates: Hillary Clinton for the Democrats, and Donald Trump for Republicans.

“A perfect storm in the Democratic Party is making a once-unfathomable scenario plausible: a political comeback for Hillary Clinton in 2024,” Andrew Stein and Douglas E. Schoen wrote in the Wall Street Journal.

Clinton, they wrote, “is already in an advantageous position to become the 2024 Democratic nominee” as “an experienced national figure.”

They pointed out that she’s actually younger than President Joe Biden, who would turn 82 shortly after the 2024 election.

Biden has said he plans to run again.

But observers have already mapped out how a 2016 rematch could happen: First, Trump declares he’s running again, as expected. That essentially clears the table on the GOP side as most of the big names have already said they would sit out if he seeks the nomination.

Even if he faces a primary challenge, polls show that Trump is likely to win.

Biden is facing the combined toll of age and low approval ratings. Vice President Kamala Harris, once seen as his hand-picked successor, is even less popular with voters. And if Democrats lose control over Congress in this year’s midterms, as expected, Schoen and Stein say “Mrs. Clinton can use the party’s loss as a basis to run for president again, enabling her to claim the title of ‘change candidate.’”

That, combined with no other obvious faces for the Democrats to claim the mantle, could open the door for her to win the nomination.

While the idea might seem out-there, the duo aren’t the only ones suggesting it.

“Hillary Clinton always seemed to believe the mantle of ‘First Female President’ was her birthright,” he wrote for The Hill last month. “Given how pathetic the field is on the Democratic side with or without Joe Biden, she may just get a second chance at winning the office her husband so famously made infamous.”

Not everyone is thrilled.

“Hillary Clinton vs. Donald Trump 2024 — yep, life has become a horror movie,” reads a headline in the New York Post.

However, Schoen and Stein went a step further. They wrote in the Journal that another Clinton campaign is not just a mere possibility, but also the only way to keep Trump out of the White House come in January 2025.

“If Democrats want a fighting chance at winning the presidency in 2024, Mrs. Clinton is likely their best option,” they claimed.

A Hillary rerun on the Democratic side isn’t the only unexpected option floated this past week.

The New York Times columnist Thomas L. Friedman wrote that the party could opt for a bipartisan, coalitional ticket, similar to the one that toppled longtime Israeli Prime Minister Benjamin Netanyahu.

He also says that Cheney could serve as a running mate to other Democrats, like ballot activist Stacey Abrams or Sen. Amy Klobuchar of Minnesota.

None of that seems likely.

But after the past few years, none of it can be ruled out, either.