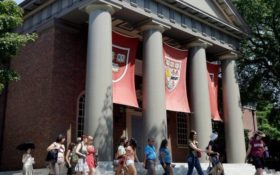 Beginning this semester, any student that is a member of single-sex final clubs and Greek organization will be completely blacklisted from scholarships and banned from leadership positions in school organizations or athletics.

According to the university, single-gender clubs “propagated exclusionary values” and maintained “forms of privilege” that Harvard found disgraceful. Those who remain in such clubs, reports Reason Magazine, risk being barred “from leadership positions, athletic teams, and scholarships.”

In December, the ban was finalized, but women at the university protested that the ban should only come down on clubs that represent “privilege.” Because of course, a female-only organization at an expensive, elitest Ivy league school does not represent any form of privilege…

Female clubs now may be given a grace period to define themselves as “gender-focused” due to an outcry from the university’s feminists — and now male-focused clubs will be the only single-gender clubs facing repercussions from Harvard’s administration.

The Daily Wire reports, “the heads and members of male-only groups will be subject to immediate punishment under the policy, women’s groups will have five years to come up with ways to comply with the new rules. Until then, they can call themselves “female-focused” and be considered to be in line with the policy change.”

But, according to Harvard, their ban on single-gender clubs may not last up to 5 years. It is subject to review right before the female groups are subject to submit a proof of change.

“A few prestigious ‘finals clubs’ are also lawyering up, preparing to sue the school under the theory that Harvard is unnecessarily burdening students’ right to free association, and that Harvard cannot punish members of clubs that don’t officially exist on Harvard’s campus,” reports The Daily Wire.

The Harvard Crimson reported that sorority rush numbers have dropped significant, and some clubs have become more gender neutral. Kappa Kappa Gamma, now The Fleur-de-Lis was the first sorority to stop being single-gender after the ban took effect.

The Fly Club has begun to take legal action against the university. Sororities Alpha Phi, Delta Gamma, and Kappa Alpha submitted a joint statement that they will not be listening to the ban — they will continue to recruit only females.

The Foundation for Individual Rights in Education has argued that Harvard is violating students’ freedom of assembly.

“Harvard should reconsider imposing this blacklist and grant students the freedom of association it promises them,” said Will Creeley, FIRE’s Vice President of Legal and Public Advocacy.