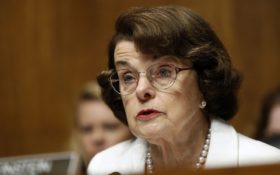 California Sen. Dianne Feinstein was just destroyed by a Harvard professor on Fox News — and since the segment aired, she hasn’t had the guts to reply.

According to Alan Dershowitz, a legal expert and longtime Harvard law professor, Feinstein is living in a dream world if she thinks President Donald Trump is in trouble.

Over the weekend Feinstein, the top Democrat on the Senate Judiciary Committee, says the panel is starting to see “the putting together of a case of obstruction of justice” against President Donald Trump.

Speaking on NBC’s “Meet the Press” Sunday, Feinstein said the evidence is coming partly from “the continual tweets” from the White House. Over the weekend, Trump focused renewed attacks on the FBI after evidence came out that their investigations against Russian meddling in the 2016 election is biased.

Feinstein said she feels Trump’s firing of FBI Director James Comey came “directly because he did not agree to lift the cloud of the Russia investigation.” She added, “That’s obstruction of justice.”

“There’s never been a case in history where a president has been charged with obstruction of justice for merely exercising his constitutional authority. That would cause a constitutional crisis in the United States,” Dershowitz said.

Dershowitz went on to explain that Special Counsel Robert Mueller understands that, which is why he can’t bring an indictment or recommend the matter to Congress.

“Sen. Feinstein simply doesn’t know what she’s talking about when she says it’s obstruction of justice to do what a president is completely authorized to do under the Constitution,” Dershowitz explained.

Feinstein’s office had no reply this week.

This week, multiple agents in the investigation by special counsel Robert Mueller have been fired from the team for secretly sharing their hatred for Trump. The FBI was caught trying to hush-up the firings, but the agency was ordered to release the information by conservative lawmakers.

Democratic lawmakers and their cronies in the governmetn seem so caught-up in the anti-Trump political witch hunt, they’re falling over themselves trying to pin something on the president. But there is zero evidence the president did anything illegal or immoral. They just FEEL the president is wrong, and are trying to make reality fit their feelings.

Feinstein doesn’t want to separate facts from those feelings.

She clearly has no interest in the truth; she’s only interested in reinforcing her own reality.

You can watch Feinstein get destroyed —