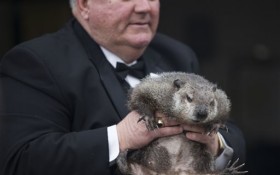 The handlers of Pennsylvania’s most famous groundhog, Punxsutawney Phil, say the furry rodent has failed to see his shadow, meaning means he’s “predicted” an early spring.

Members of the top hat-wearing Inner Circle announced the “forecast” at sunrise, just before 7:30 a.m. Tuesday.

A German legend has it that if a furry rodent sees his shadow on Feb. 2, winter will last another six weeks. If not, spring comes early.

In reality, Phil’s prediction is decided ahead of time by the group on Gobbler’s Knob. The tiny hill is located just outside the town for which he’s named about 65 miles northeast of Pittsburgh.

Records going back to 1887 show Phil has now predicted more winter 102 times while forecasting an early spring just 18 times. There are no records for the remaining years.