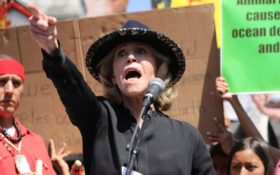 Liberal screen icon Jane Fonda is once again cheering for death and destruction against Americans.

This time, she’s praising the COVID-19 coronavirus pandemic – because she believes it will hurt President Donald Trump.

“I just think COVID is God’s gift to the left,” Fonda said in a Zoom video posted online while laughing, then admitted: “That’s a terrible thing to say.”

But as terrible as it is, the two-time Oscar winner was chuckling as she spoke – laughing in the face of a deadly pandemic that has claimed more than 200,000 American lives.

As far as she was concerned, however, this is all about Trump.

“I think it was a very difficult thing to send down to us, but it has ripped the Band-Aid off who he [Trump] is and what he stands for and what is being done to average people and working people in this country,” she claimed.

She said people are angry over the virus – and that, she added, is a political opportunity for liberals to seize.

“We have a chance to harness that anger and make a difference,” she said. “I feel so blessed to be alive right now.”

Fonda has a long and controversial history of far-left activism, infamously visiting North Vietnam at the height of the Vietnam War.

There, she was photographed atop one of the antiaircraft guns that targeted American pilots… leading to the nickname that has followed her around to this day: Hanoi Jane.

She’s apologized for the incident – but as her latest comments show, she’s still wishing ill on Americans.

And she’s not alone.

Fonda is just the latest in a long line of leftists openly rooting against the success of the nation just to get back at Trump.

In 2018, HBO host Bill Maher said he was hoping that millions of Americans would lose their jobs.

“I feel like the bottom has to fall out at some point,” he said. “And by the way, I’m hoping for it.”

He lamented the economy, which at the time was bustling.

“I think one way you get rid of Trump is a crashing economy,” he said. “So please, bring on the recession. Sorry if that hurts people, but it’s either root for a recession or you lose your democracy.”

A market crash been a leftist fantasy since the dawn of the Trump presidency.

As soon as Trump won… before he even set foot in the White House… New York Times columnist Paul Krugman warned that the markets will “never” recover.

“We are very probably looking at a global recession, with no end in sight,” said Krugman, who won a Nobel for his work as a supposed economist.

Now, with the election just around the corner, the left is turning it up another notch.

Filmmaker/activist Michael Moore went so far as to claim Trump was faking his coronavirus diagnosis to build sympathy ahead of the vote.

“He’s an evil genius and I raise the possibility of him lying about having COVID-19 to prepare us and counteract his game,” he wrote on Facebook. “He knows being sick tends to gain one sympathy. He’s not above weaponizing this.”

Studies show celebrities rarely sway voters, but that hasn’t stopped them from trying during every election.

But in this case, Moore has one credit under his belt: In 2016, he not only correctly predicted a Trump victory, but said it would come thanks to a sweep of the rust belt states including his native Michigan.

In August, he repeated that prediction for 2020, saying enthusiasm for Trump remains “off the charts” ahead of the election.

“Sorry to have to provide the reality check again,” he said.

That prediction earned a rare agreement from the president himself.