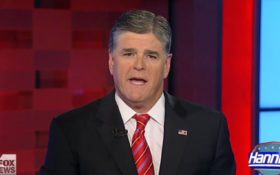 A recent interview by Fox News’ Sean Hannity revealed that the entire extended family of President Donald Trump — sons, daughters, in-laws, and more — have had “white powder” terror envelopes mailed to them since the inauguration.

And Trump’s son Eric Trump is demanding to know, “Where’s the moral outrage?”

“I’ve been threatened. Our family’s been threatened,” Eric Trump said on Fox News’ “Hannity” Thursday evening. “All of us. We’ve all had white powder show up at our house. Why is there no moral outrage about that?”

The only incident of terror reported by the mainstream media reported on was a short-lived piece after Donald Trump Jr.’s ex-wife, Vanessa Trump, was hospitalized after a “white powder” scare at her family home in February. The envelope, which contained a non-poisonous substance, was eventually traced back to a Massachusetts liberal who was angry at the president. He was arrested and charged for ten different crimes.

But Eric Trump’s bombshell revealed the astonishing amount of threatening letters his family receives monthly. It is totally under reported. It has been going on for years.

And the mainstream media doesn’t care.

According to reports, on April 2016, Trump Tower in New York City received hoax anthrax packages addressed to then-Republican presidential candidate Donald Trump that demanded he drop out of the race.

Eric Trump’s own wife, Laura Trump, was the victim on an anthrax hoax in March of that same year when she opened an envelope filled with white powder at their home in New York.

Imagine the media firestorm if former President Barack Obama’s sister-in-law had been hospitalized from an anthrax scare?

Picture in your mind the absolute outrage if “white powder” envelopes were being regularly mailed to the Obama’s children and their extended family?

There’d be riots on the streets! There would be huge panels on CNN discussing the racist overtones of “white powder” to our nation’s first African-American president. The ABC News and MSNBC coverage would be breathless, nonstop, minute-by-minute breakdowns on the manhunt for the monster behind these attacks.

But because it’s women and children being threatened in the Trump family, there’s not a peep from the media.

Where’s the moral outrage from the media?

There is none. They’re too busy playing victim. That’s the problem.

You can see Eric Trump’s full appearance on Hannity here —