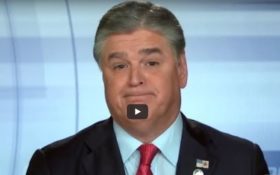 Fox News star Sean Hannity has earned a reputation as a controversy magnet.

And sure enough, he grabbed headlines after his broadcast on Tuesday night.

He interviewed former President Donald Trump — the former president’s first interview since the chaotic fall of Afghanistan’s capital on Sunday.

And it was a bombshell of an interview.

Trump defended his deal with the Taliban and castigated Biden for the chaos in Afghanistan.

“It’s a great thing that we’re getting out, but nobody has ever handled a withdrawal worse than Joe Biden,” Trump said. “This is the greatest embarrassment, I believe, in the history of our country.”

“Nobody has ever handled a withdrawal worse than Joe Biden,” Trump continued. While running for president, it’s worth noting, Trump savagely criticized former President Barack Obama’s 2011 withdrawal from Iraq.

“I’ve never realized how important… a President, the head of this country, is.”

Trump discussed Biden’s decision to return to the White House for a speech. He said, “He only returned because he was getting terrible press. He didn’t return for any other reason.”

“I never had a lot of confidence, frankly, in Ghani,” Trump continued. “I said that openly and plainly. I thought he was a total crook. I thought he got away with murder. He spent all his time wining and dining our senators. The senators were in his pocket.”

“That was one of the problems that we had, but I never liked him, and I guess based on his escape with cash, I don’t know, maybe that’s a true story. I would suspect it is. All you have to do is look at his lifestyle, study his houses where he lives. He got away with murder in many different ways.”

Trump then discussed what he would have done differently than Biden.

“Then, I was going to take out all the military equipment … that Russia will now be examining, and China,” he continuted, referring to the weapons given to Afghanistan by the U.S. military. “Take the equipment out, and then take the soldiers out.”

Trump said it would be difficult for Biden to move Americans out of Taliban-ruled Afghanistan. He called the Taliban “very brutal” and said, “They don’t like to negotiate.”

Trump also took a victory lap and recounted his deal with the Taliban.

“We lost no soldiers in the last year-and-a-half because of me and because of the understanding that we had,” Trump argued. “In Chicago and in New York and in other cities in the United States, many people die every weekend. We lost no soldiers in Afghanistan because they knew I wasn’t going to put up with it.” Sure enough, there have been no American causalities in Afghanistan since March 2020, the blog iCasualties.org reported in early August.

Trump also recounted the chilling videos coming from Afghanistan. “I looked at that big, monster cargo plane yesterday, with people grabbing the side and trying to get flown out of Afghanistan because of their fear, their incredible fear, and they’re blowing off the plane from 2,000 feet up in the air.”

“Nobody’s ever seen anything like that. That blows the helicopters in Vietnam away. That’s not even a contest. This has been the most humiliating period of time I’ve ever seen.”