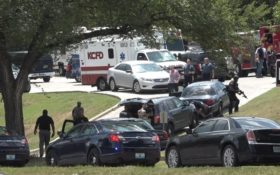 A gunman being investigated in the killing of a university student from India shot and wounded three Kansas City police officers Sunday before dying in an exchange of gunfire with police, authorities said.

The three officers’ wounds were not life-threatening, police said.

The suspect, whose name has not been released, had been identified as a person of interest in the slaying of Sharath Koppu and officers had him under surveillance, according to police. Koppu, 25, was a master’s degree student from India who was studying at the University of Missouri-Kansas City.

Koppu was shot on July 6 during an armed robbery at a fast food restaurant in Kansas City where he worked.

Jagdeesh Subramanian, president of the India Association of Kansas City, said the group is grateful to police for pursuing Koppu’s shooting diligently and that “there is some closure” with the person of interest’s death.

“We are equally disheartened hearing about the three officers who were shot in pursuit,” Subramanian said in a statement. “Our thoughts and prayers are with them for a speedy recovery.”

The man being sought by police in relation to Koppu’s death opened fire Sunday afternoon on officers with a semi-automatic “AK-47-type” rifle as they conducted an investigation at a motel less than 2 miles (3 kilometers) from Kauffman Stadium, where the Kansas City Royals baseball team plays, police spokesman Sgt. Jake Becchina told The Associated Press. Two officers were wounded in that gunfire.

Police had been looking for the man all week, Kansas City police Chief Rick Smith told reporters in a video posted online by KCTV .

“This is the first time we laid eyes on him,” Smith said.

After shooting the two officers, the man fled in a vehicle with another person, Becchina said. Police took the vehicle and placed the other person in custody, though Becchina said that individual isn’t believed to be involved in the fatal robbery or the shootings of the officers.

The gunman remained at large until about an hour or so later, when he opened fire at officers from inside a house where he had barricaded himself a short distance from the motel, police said. A detective was shot.

“We didn’t know he was there. He just popped up all of a sudden,” Smith said.

Becchina said about 15 minutes later, the man emerged from the home and again opened fire. Officers fired back, fatally wounding him.

Koppu, the university student who was killed in the shooting that police were investigating, was a software engineer who came from India to the United States in January, according to a GoFundMe page set up by his family. Raghu Chowdavaram, a cousin, told The Kansas City Star newspaper after Koppu’s death that Koppu was a “perfect gentleman” who wouldn’t hurt anyone.

Subramanian said the robbery and fatal shooting of Koppu appeared random and unfortunately “could have happened to anybody.”