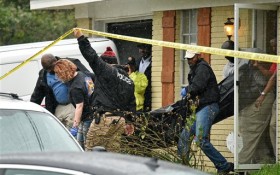 It reads like a plot straight from a horror movie. A bad guy storms the family home, stabbing the father and holding the wife and child hostage at knife point.

Thanks to the Second Amendment, this scary story had a happy ending for the good guys.

A murder suspect who had escaped from a Mississippi jail used restraints to hold a couple and their toddler hostage for hours before one of the couple managed to break free, get to the family handgun and kill the suspect, authorities said Thursday.

The intruder was identified as Rafael McCloud, 34, who escaped the Warren County jail a week ago by overcoming an officer with a homemade shank, setting off an intense manhunt.

Vicksburg Police Capt. Sandra Williams said that McCloud confronted a 30-year-old man and his 5-year-old son with a knife as they entered their garage about 4 a.m. Thursday.

McCloud fought with the husband and wife, stabbing the man in the shoulder, Vicksburg Police Chief Walter Armstrong said. McCloud forced them back inside and held the man, his 24-year-old wife and son in a bathroom.

Williams says McCloud allowed the wife to leave the bathroom and she returned with a family handgun, shooting McCloud. She cut loose her tied-up husband, who then shot McCloud multiple times.

Deputy Warren County Coroner Kelda Bailess says McCloud was hit at least once in the head. He was found dead, slumped over the bathtub.

The police were called at 7 a.m., more than two hours after the ordeal began.

Police did not know of any connection between McCloud and the family, who lived on a street of small homes that runs along a ridge north of downtown Vicksburg. On side of the ridge looks out toward the Mississippi River, while the other looks onto part of the Vicksburg battlefield, a key position captured by Union soldiers during the Civil War.

At the one-story cream-brick house, a crime scene van was backed up to the single-car garage. The home is less than a mile from the jail.

McCloud escaped March 2 by using a homemade shank to get a jump on a jail officer and forced the officer to give up his keys, radio, pants and jacket, authorities said. He went out a door to freedom because the century-old jail in downtown Vicksburg has no perimeter fence.

Officials combed the town for days, interviewing family members and friends of McCloud and poking through abandoned buildings. Schools bolstered security, and Vicksburg police warned people to bring in guns from vehicles and make sure their houses hadn’t been forcibly entered.

McCloud was indicted on murder and rape charges in the January 2015 death of Sharen Wilson. He had been held in the jail since his June 29 arrest, and has prior felony convictions for auto burglary, grand larceny and armed robbery.