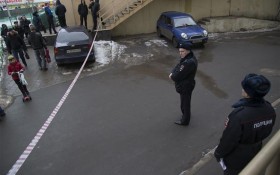 An unnamed Muslim woman who claims to have been a terrorist was trusted with the care of a young child by two Russian parents in Moscow on Monday.

When the parents left, the woman allegedly did the unthinkable — according to authorities, she murdered and then beheaded the child, and walked the streets of Moscow waving the head outside a subway station and yelling, among other things, “Allahu Akbar!”

Videos posted on Russian news websites show the woman dressed in a burka, holding the severed head and shouting “I am a terrorist” in Russian. In some of the videos the woman is then tackled by men who appear to be police.

While the gruesome videos are available online, The Horn News has made the decision not to publish them here.

The attack left all of Russia stunned and dominated national news coverage.

The Investigative Committee released a statement saying a woman was arrested Monday on suspicion of killing a child reportedly just 4-years old in an apartment near the metro station in northwestern Moscow and then setting the apartment on fire. The woman, a 38-year-old native of one of the former Soviet republics in Central Asia, was believed to have been hired as the child’s nanny, the statement said.

Russian news reports, citing law enforcement sources, said the child had been decapitated and his body burned in the apartment fire.

The woman appeared to have waited until the parents and an older child had left the apartment before killing the younger child, the statement said.