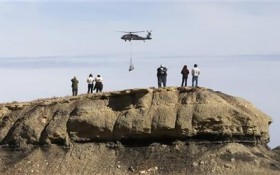 Paleontologists with the New Mexico Museum of Natural History and Science on Thursday unveiled the first baby Pentaceratops skull ever discovered as hundreds of people lined up to get a look.

Scientists had cut open the giant plaster jacket that protected the skull as it was airlifted out of the desert badlands of northwestern New Mexico and trucked to the museum.

They revealed the shield-like part of the dinosaur’s skull, some teeth, an arm bone, a rib and what looked like a vertebrae, but museum curator Spencer Lucas said there’s still much work to be done.

Now, technicians will begin the painstaking work of digging out the fossils from the rock in which they have been encased for some 70 million years.

The process will take many months, but the public will be able to watch from windows that offer a view into the museum’s preparation room. 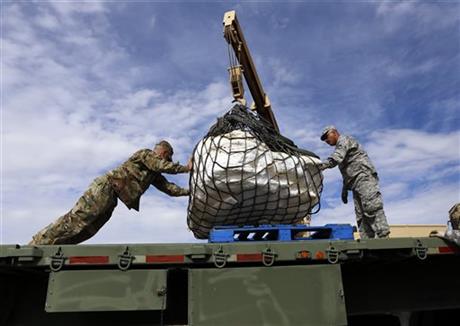 Hundreds of people, including parents with their children, lined up along the windows during a free public viewing Thursday evening. Some children were able to get an up-close look as museum staff showed off the find, while other visitors held up their smartphones on the other side of the glass.

Lucas said the fossils are significant and sure to provide new insight into the rhinoceros-like, plant-eating dinosaurs that roamed North America tens of millions of years ago.

Less than 10 adult Pentaceratops skulls have been unearthed over the past century, and this marks the first baby skull to ever be recovered, Lucas said.

“So here now we have the first glimpse at growth and the early stages of life of this dinosaur,” he said.

Experts say Pentaceratops was one of the largest, if not the largest horned dinosaur that ever lived. It could be up to 27 feet long and weigh 5 tons or more.

Paleontologists suspect Pentaceratops may have used its five horns for defense. Evidence also suggests the horns and the shield-like part of the skull could have been used to attract mates.

The remains of the young Pentaceratops appear to have been washed through a streambed, as some of the skeleton has fallen apart. But how the animal met its demise is up for investigation, scientists said.

Muddy conditions last week prevented the team from transporting the plaster jacket that contained the remainder of the baby’s skeleton. That will happen later.

The discovery was made in 2011 in the Bisti Wilderness by Amanda Cantrell, the museum’s geoscience collections 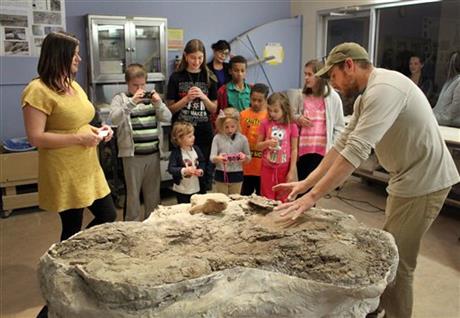 Tom Suazo, right, a fossil predator with the New Mexico Museum of Natural History and Science, tells a group of children about the museum’s latest find. The baby Pentaceratops skull on display in the museum’s preparation room is the first to ever be discovered. (AP Photo/Susan Montoya Bryan)

manager. A few years of planning, permitting and excavation followed with the help of New Mexico National Guard Blackhawk helicopters.

Pilot Kevin Doo attended the unveiling with his wife and child. He said it was amazing to see the precious cargo unwrapped.

“What a terrific find,” he said, noting that a lot of hard work went into pulling off the unique recovery mission.

A crew of museum staff and volunteers also had to pack in tons of tools, water, plaster and other materials to prepare the fossils for removal because the find was made within a federally protected wilderness area.