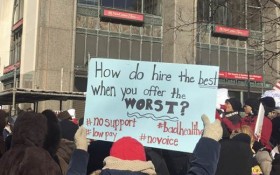 Most of Detroit’s public schools are closed for the day due to teacher absences. The teachers, who are banned from holding school children hostage by striking, organized a massive sick-out day to force the shutdowns.

Their demands? Higher wages and better benefits, among others.

Detroit Public Schools made the announcement Wednesday morning, saying they were forced to shut more than 85 of its roughly 100 schools. The move left thousands of working parents suddenly needing childcare.

On Tuesday night, a group advocating for change at city schools known as Detroit Teachers Strike to Win warned of closures as teachers continue a sick-out to protest school conditions, the district’s financial condition and work environments.

The district says it has no choice but to close schools when teachers don’t report to work. More than 60 schools were closed Jan. 11 because of an absence of teachers and other sick-outs have taken place.