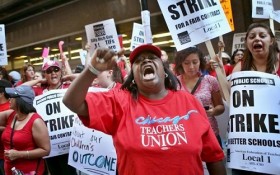 Chicago is a city faced with a deep budget crisis and some of the nation’s worst schools. But that won’t stop the city’s teacher’s union from holding parents hostage today.

Thousands of Chicago teachers — some making over $126,000 a year — are planning to walk off the job today in what could be an early glimpse of a more prolonged strike still to come.

Some 27,000 Chicago Teachers Union members overwhelmingly authorized an open-ended strike. Their demands — more money from taxpayers for their failing schools (and their own pockets) from the city that’s facing a multi-billion dollar budget crisis.

In February, a union bargaining team rejected an offer that provided pay raises and guaranteed job security and met other union demands, but that would have asked teachers to contribute toward their pension costs and health coverage.

Authorities call the one-day walkout an “illegal strike,” noting state law says the union and the district must exhaust a series of steps before teachers may strike over a contract, and that hasn’t happened yet.

The union says teachers will picket outside Chicago schools in the morning. And if their demands aren’t met by this afternoon, they’ll send thousands streaming into downtown roads during Friday rush hour, disrupting traffic.