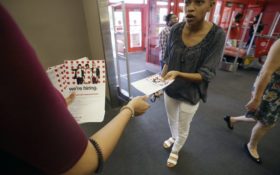 U.S. employers added a solid 261,000 jobs in October in a bounce-back from the hurricanes that slammed the Southeast in September.

The unemployment rate declined to 4.1 percent, the lowest in nearly 17 years, from 4.2 percent in September, the Labor Department said Friday. But the drop in the rate occurred mostly because many people stopped looking for work and so were no longer counted as unemployed.

October’s burst of hiring largely reflects a rebound from the hurricanes that temporarily depressed job gains in September. But it also shows that for all their fury, the storms didn’t knock the economy or the job market off course. Over the past three months, job growth has averaged 162,000, similar to the pace of hiring before the hurricanes.

Many businesses are struggling to find people to fill open jobs. The proportion of adults who are either working or looking for work fell last month to 62.7 percent, slightly lower than a year ago.

Despite a shortfall of workers, average hourly pay rose just 2.4 percent from a year ago, one-half percentage point lower than September’s annual gain. That figure might have been distorted by the storms: Many lower-paid workers at restaurants and bars returned to work last month, and their influx could have depressed overall pay.

The government also revised up its estimate of the job total for the previous two months. In August, employers added 208,000, up from 169,000. They added just 18,000 in September as thousands of businesses were forced to close. But that figure was revised higher from a previous estimate that showed a loss of 33,000.

With September’s jobs figure back in the positive column, the economy has now added jobs for 85 straight months, a record streak.

Even with the economy in its ninth year of recovery from the Great Recession, hiring remains solid and growth is healthy. For the first time since the downturn, the global economy is broadly improving, with all major advanced economies expanding at the same time.

The value of the dollar has slid since earlier this year, a move that makes U.S. goods less expensive overseas. Those trends are lifting U.S. exports and boosting the profits of American multinational corporations.

Americans are also sounding more optimistic about the economic outlook, which could prompt more people to open their wallets in the coming months. Consumer confidence reached its highest level in nearly 17 years in October, according to the Conference Board.

Auto sales have also jumped since the hurricanes as people replace damaged and destroyed cars. Replacement auto sales helped lift overall consumer spending by the most in eight years in September. Still, that is likely to be a temporary economic boost.

The economy expanded at a 3 percent annual rate in the July-September quarter, after a 3.1 percent gain in the second quarter. That was the best six-month showing in three years.