Graham drops out of GOP presidential race - The Horn News 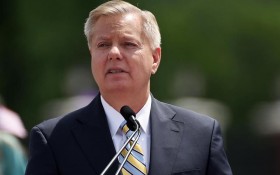 In a message to supporters and campaign volunteers, Graham said he felt confident that the Republicans would put forth a candidate who shares his ideals, especially around issues like national security.

“I’m far more confident today that our party will reject the Obama Doctrine of leading from behind and will provide the strong leadership America needs,” he said.

Graham was elected to the United States Senate in 2003 and is currently the senior senator from South Carolina. He sought to run a campaign as a moderate Republican, touting his years of government experience.

But in a race that has been dominated by outsiders like billionaire Donald Trump and Dr. Ben Carson, Graham’s insider status was a disadvantage. He was repeatedly relegated to the under card in GOP debates and was polling in the low single digits.

Graham’s exit thins a Republican field that has been repeatedly criticized for being overcrowded.