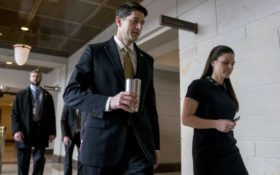 On the edge of a government shutdown, a divided House voted late Thursday to keep the government open past a Friday deadline — setting up an eleventh-hour standoff in the Senate, where Democrats have vowed to kill the measure.

The partisan roadblock in the GOP-controlled Senate left just a day and little hope for negotiators searching for a way to avoid shuttering federal offices and keeping thousands of employees home from work. A closure, coming on the one-year anniversary of President Donald Trump’s inauguration, would be only the fourth such episode in roughly two decades and pose perils for both in parties in an election year.

Still, Senate Democrats appeared ready to take the risk of shouldering the blame. Emboldened by a liberal base clamoring to challenge Trump, they’ve demanded concessions on immigration, chiefly protection for thousands of young immigrants facing deportation, and largely unified behind the effort. Leaders said Thursday they would have the votes to block the House-passed measure that would have funded the government for another four weeks.

Republican leaders said the plan would give the White House and lawmakers more time to work through the disputes on immigration and spending that they’ve tangled over for months. Those talks were roiled last week by Trump’s comments questioning the need for immigration for “shithole countries” in Africa. With trust at a low ebb, Democrats said they weren’t willing to give Republicans that time to negotiate, arguing they could be back in the same standoff a month from now and push for a shorter extension that could keep the pressure on.

Schumer asked how can senators negotiate when the president, who has to sign the legislation, “is like a sphinx on this issue, or says one thing one day and one thing the next?”

Most Senate Democrats and some Republicans were expected to vote against the House plan, probably Friday.

Senate rejection would leave the pathway ahead uncertain with only one guarantee: finger-pointing by both parties, which began as that chamber debated the measure late Thursday.

Senate Majority Leader Mitch McConnell, R-Ky., accused Democrats of a “fixation on illegal immigration,” which he said “has them threatening to filibuster spending for the whole government.”

Trump weighed in earlier in the day from Pennsylvania, where he flew to help a GOP candidate in a special congressional election.

“I really believe the Democrats want a shutdown to get off the subject of the tax cuts because they’re doing so well,” he said.

The stakes are high for Republicans, who control the Congress and the White House and are still struggling to prove they can govern.

McConnell warned GOP senators in an email obtained by The Associated Press that voting against the measure “plays right into Democrats hand” — presumably because it would dilute the argument that Democrats killed the legislation.

The GOP controls the Senate 51-49 and will need substantial Democratic backing to reach 60 — the number needed to end Democratic delaying tactics. Republicans were all but daring Democrats to scuttle the bill and force a shutdown because of immigration, which they said would hurt Democratic senators seeking re-election in 10 states that Trump carried in 2016.

“Senator Schumer, do not shut down the federal government,” said House Speaker Paul Ryan, adding, “It is risky. It is reckless. And it is wrong.”

Republicans in the House faced their own divisions on the short-term bill, ones only overcome after a last-minute round of bargaining with conservatives.

House passage was assured after the House Freedom Caucus reached an accord wth Ryan, R-Wis. The leader of the hard-right group, Rep. Mark Meadows, R-N.C., said Ryan promised future votes on extra defense spending and on a conservative, restrictive immigration bill, though a source familiar with the discussion said Ryan didn’t guarantee an immigration vote. That person was not authorized to speak publicly about the private negotiations and spoke on condition of anonymity.

The House voted by a near party-line 230-197 vote to approve the legislation. Just 11 Republicans, mostly conservatives and a pair of moderate Hispanic lawmakers, opposed the measure. Six Democrats, a mix of Hispanic and moderate legislators, backed the bill.

Shadowing everything is this November’s elections. Trump’s historically poor popularity and a string of Democratic election victories have fueled that party’s hopes of capturing control of the House and perhaps the Senate.

As he’s done since taking office a year ago, Trump was dominating and confusing the jousting, at times to the detriment of his own party. He tweeted that the month-long funding measure should not contain money for a children’s health insurance program — funds his administration has expressly supported — then the White House quickly said he indeed supports the legislation.

Congress must act by midnight Friday or the government will begin immediately locking its doors. Though the impact would initially be spotty — since most agencies would be closed until Monday — the story would be certain to dominate weekend news coverage, and each party would be gambling the public would blame the other.

In the event of a shutdown, food inspections and other vital services would continue, as would Social Security, other federal benefit programs and most military operations.

But Pelosi compared the GOP bill to “having a bowl of doggy-doo and adding a cherry on top and calling it a chocolate sundae.”

Democrats want a deal to protect around 800,000 immigrants from deportation who arrived in the U.S. as children and now are here illegally. Trump has ended an Obama-era program providing those protections and given Congress until March to restore them, and he and Republicans want any immigration deal to include money for the president’s promised wall along the Mexican border and other security measures..

Republicans were demanding that a separate budget bill financing government for the rest of this year include big boosts for the military, and they accused Democrats of imperiling Pentagon funding. Democrats were insisting on equally large increases for domestic programs for opioid treatment and veterans — efforts that many in the GOP also back.