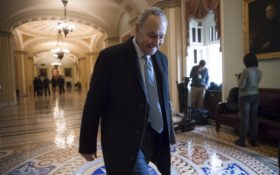 In the face of withering criticism from voters and the mainstream media, Democrats caved on the government shutdown saga that had griped the nation for three days.

Senate leaders reached an agreement to reopen the government Monday around 1:00pm EST.

Democrats yielded and ended their delaying tactics against a bill financing federal agencies through Feb. 8.

McConnell says the end to the standoff shows “the American people didn’t understand” why Democrats shut down the government because they wanted to help “illegal immigrants.”

The Senate has started a vote to advance the bill reopening government. It is expected to pass easily, and House approval is expected later.