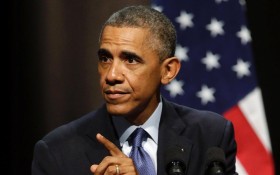 How much does it cost to improve the “workflow and usable desk space” of U.S. Immigration and Customs Enforcement (ICE) director Sarah Saldana and her assistant?

$100,000. That’s how much the Obama administration spent renovating the luxurious suite of it’s director, which includes her personal bathroom and her assistant’s office, according to recently uncovered internal document.

Critics are calling this another example of rampant waste in President Barack Obama’s administration. The Daily Caller, which first reported the story, interviewed a staffer on the renovations. “The Director’s space was quite nice the last time I saw it, so, if this is true, I imagine these funds could have been put to better use in the field,” the staffer wrote.

“Part of the construction included installing a storage and new towel bar in the director’s bathroom. Workers also tried to put in a new mirror and medicine cabinet, but ended up finding it ‘functionally unacceptable.’ A ‘sound attenuation system’ was also installed to mask conversations in the director’s office,” The Daily Caller reported.

ICE has come under increasing fire for the way it has spent funds. According to The Daily Caller, “In 2015, ICE deported 43 percent fewer illegals compared to 2012, despite an increase in the agency’s budget from $2.75 billion to $3.4 billion. Part of the reason for this decline is the Obama administration’s reluctant stance on deportations.”

This isn’t the first criticism Saldana has faced. In April, “House Oversight Committee Chairman Jason Chaffetz, R-Utah, slammed the Obama administration … for not deporting thousands of undocumented immigrants convicted of crimes — who he said often commit additional crimes, including murder,” and personally rebuked Saldana during a House hearing, the Salt Lake Tribune reported.

Saldana was appointed to the ICE director position by President Barack Obama in Dec. 2014.