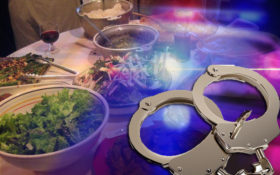 It’s an example of big government overreach gone insane: A California woman who had the nerve to cook a meal for a pot-luck dinner club is facing PRISON!

The charge? Mariza Ruelas was allegedly operating a business without a license and selling food without a permit, which could supposedly lead to safety issues with the food she served.

But this wasn’t someone running a restaurant.

This was a POT LUCK CLUB – a group of friends on Facebook swapping meals.

You know how Facebook is. This group got big, eventually involving thousands of people.

But at its heart, it remained a place for people like the 37-year-old mother of six to trade recipes, kitchen tips and even fully cooked dishes.

Sometimes, members of the club would kick in a few bucks when they didn’t have a dish to share, just to cover the cost of ingredients, like the ceviche – a raw fish dish – that Ruelas became known for.

“I gave the same food away that I fed to my family never would I bring them any harm,” she wrote on Facebook.

In this case, an undercover cop infiltrated the group as if it were a terrorist cell waiting to attack the nation with delicious home-cooked meals.

The Nanny Staters claim someone in a pot-luck club might prepare a meal in unsanitary conditions. But if that’s a risk you’re worried about, here’s a better solution: DON’T join a pot-luck dinner club!

Ruelas and five others were busted. The others copped a plea deal, but Ruelas says she was given a much stiffer offer because she had the nerve to exercise her First Amendment rights and complain about this injustice on social media.

Even worse, because she demanded a trial, spiteful prosecutors added more charges that could lead to TWO YEARS in prison over this nonsense.

San Joaquin County Chief Deputy District Attorney Sherri Adams told the Los Angeles Times that Ruelas is “making more of this than it is” as if it’s all her fault that the DA’s office is acting like an ugly bully.

“It’s not the big, bad D.A.’s office trying to take this woman down,” Adams told the newspaper.

Just one problem: The big, bad D.A.’s office IS trying to take this woman down, because that’s what a D.A.’s office does… by definition… when it decides to prosecute.

Adams even admitted as much, flippantly saying Ruelas would likely get “no more than” 10 days in jail.

Even more outrageously, the Times noted that she laughed when she said it… as if that’s somehow a vacation and not a terrifying ordeal for the six kids who will be without their mother.

The case is so absurd even other prosecutors are publicly griping that it’s an embarrassment to their profession.

“We don’t dispute the legality,” Motecuzoma Sanchez told the local ABC station. “Our argument is the priorities. We’ve got unsolved murders. We’ve got a high crime rate – a violent crime rate that is on the increase, not the decrease.”

And now, people have one less place to trade delicious home-cooked meals.