Got him! US Air Force kills ISIS leader - The Horn News 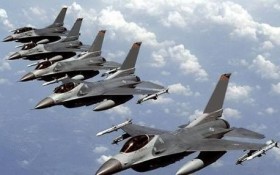 He appeared in numerous Islamic State execution videos. For years he helped lead Islamic terror around the globe.

That was until the U.S. Air Force cut the jihadist down.

Early Tuesday, the Pentagon announced a top Islamic State leader in Iraq’s Anbar province has been killed by an American airstrike.

Pentagon press secretary Peter Cook says Abu Wahib and three others were killed when their vehicle was struck on May 6 in Rutba. He says Wahib’s death is a blow to the group’s leadership.

A senior U.S. official said it was an American airstrike. The official was not authorized to discuss the matter publicly, so spoke on condition of anonymity.

“ISIL leadership has been hit hard by coalition efforts and this is another example of that,'” Cook said, using an alternative acronym for ISIS. “It is dangerous to be an ISIL leader in Iraq and Syria nowadays.”

Cook says Wahib was a former member of Al-Qaeda in Iraq and has appeared in Islamic State execution videos. There have been unconfirmed reports in the past suggesting Wahib was targeted by strikes, but this is the first time the Pentagon has said he was killed.