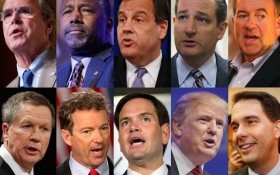 A major poll released today indicates that Wisconsin Gov. Scott Walker is losing major ground in Iowa. Considering he’s spent a huge amount of time and money in the state, this news could devastate his presidential hopes. Walker, who had led in Iowa for months, has plummeted to third place in this poll. He now only holds 9% share.

What’s next for Walker will decide his campaigns fate – a trip to the famous Iowa State fairgrounds.

For those who would be president, a visit to the Iowa State Fair may be the purest distillation of the campaign experience in the state that starts the voting in the race for the White House.

The 11-day event starts Thursday, and most of the 2016 hopefuls will pass through, pausing to chomp on deep-fried snack foods, visit with locals out for a day of fun and spend some time on the political soapbox to talk with voters.

If all goes well, the fair provides an opportunity for a candidate to have candid interaction with voters and shows off a side of him or her not often seen on TV.

But in the increasingly stage-managed world of presidential politics, awkward moments and ill-timed soundbites can flow from this unscripted setting.

“It’s an important thing for candidates to do,” said Tom Henderson, chairman of the Democratic Party in Iowa’s Polk County. “The pitfall is that in prior years, the real news story has been hecklers, which leads to quotes the candidates have to answer for.”

Consider the case of Mitt Romney, who during the last campaign said atop The Des Moines Register’s soapbox: “Corporations are people, my friend.” The comment dogged Romney, the former private equity executive, for the rest of his campaign.

This year, more than a dozen candidates for president are scheduled take their turn on the soapbox, among them are Walker as well as Republicans Jeb Bush and Marco Rubio. Democrats Bernie Sanders and Martin O’Malley will, too.

If the Walker campaign is going to regain its momentum, it will have to play this fairgrounds visit perfectly.