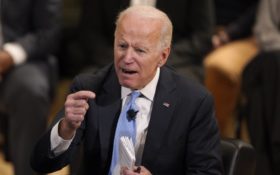 The House Intelligence Committee Democrats, led by Chairman Adam Schiff, D-Calif., have been hidden the impeachment proceedings behind closed doors in what skeptics have called a “Soviet-style” impeachment coup.

President Donald Trump told his fellow Republicans to “take the gloves off.”

And now the GOP is prepared to turn the tables.

The Washington Post is reporting that the GOP might drag former Vice President Joe Biden to the stand to testify in this impeachment saga.

In fact, they may even throw Hunter Biden on the stand as well.

Based on the reports, Republicans see an opportunity to scrutinize the Bidens under the public spotlight (long overdue, seeing as how the mainstream media so often lets them off the hook).

However, they know the political move is a risky one — and it’s not immediately clear whether the Bidens are able to legally appear as witnesses. Republicans are also afraid it could look overly political.

The Post writes that the idea first arose during a lunch meeting between Sens. Rand Paul, R-K.Y., and John Kennedy, R-L.A. Paul took it a step further when he showed up at President Donald Trump’s campaign rally in Kentucky, declaring, “I say this to my fellow colleagues in Congress, to every Republican in Washington: Step up and subpoena Hunter Biden and subpoena the whistleblower!”

Former White House aide Steve Bannon seems to think Sen. Paul is on to something with his call to action.

“The Bidens have to be called for,” Bannon said. “Joe Biden is a hand grenade, and Hunter Biden is the pin. And when that pin gets pulled, the shrapnel is going to blow back all over the Democratic establishment.”

But, for all the enthusiasm, not all top GOP lawmakers are on board.

Sen. Lindsay Graham, R-S.C. is very lukewarm on the idea. He says, “I don’t have jurisdiction over Hunter and Joe Biden, so we’re not going to call them at the Judiciary Committee.”

“That’s just not proper,” he said. “I don’t have jurisdiction and I’m an institutional guy.”