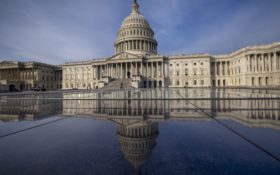 Congress and the President Donald Trump White House are facing another government shutdown — but, this time things are different and Washington is on the edge.

Hard-line conservatives are threatening to scuttle establishment Republican leaders’ plans to prevent a weekend government shutdown. GOP leaders lack the votes to push their proposal through the House without conservative backing.

The setback late Tuesday came as a deal between Trump and Congress to protect illegal immigrants from deportation also remained distant.

The resistence by the House Freedom Caucus came as establishment leaders raced against a Friday deadline for pushing a short-term spending bill through Congress. If they fail, federal agencies would start shutting their doors over the weekend. That’s an election-year debacle that career politicians are eager to avoid for fear of alienating voters.

The leader of the Freedom Caucus emerged from a Tuesday night meeting to say its members — and other GOP lawmakers as well — want a short-term bill keeping federal agencies open to contain added money for the military.

“There’s not enough support to pass it with GOP-only votes in the House,” the group’s leader, Rep. Mark Meadows, R-N.C., told reporters. He said he planned to discuss their concerns with Republican leaders.

The GOP focus on keeping the government open comes as it’s become certain there’s no time to cut a deal by Friday on protecting illegal immigrants.

Democratic leaders said they would not promise to vote to keep the government open past Friday without a plan to preserve a program that protects the illegal immigrants known as “Dreamers.”

House Republican leaders tried to win over wary conservatives with a promise to repeal unpopular taxes as part of the bill preventing a shutdown.

They sweetened the plan with a two-year delay on implementation of unpopular taxes on medical devices and generous employer-subsidized healthcare plans. The taxes, also unpopular with many Democrats, are part of former President Barack Obama’s marquee health law.

The temporary funding bill would also include a long-delayed, six-year renewal of a popular health insurance program for children of low-income families. It would fund the government through Feb. 16.

House Speaker Paul Ryan, R-Wis., unveiled the plan at a Tuesday evening GOP meeting. Lawmakers and aides initially said it was received well, raising hopes that a potential shutdown would be sidestepped with relative ease. A Ryan spokeswoman declined later to comment on the Freedom Caucus’ opposition.

Many Democrats said they’re still unlikely to support the measure without an agreement on immigration. The prospects for such a deal were complicated as Democrats appeared to see scant reason to bargain with a president many in their party view as holding racist views.

Negotiations on immigration were to resume Wednesday but Marc Short, a top White House aide, said an agreement was very unlikely to come this week. “We’re optimistic that we’ll get a deal,” Short said. “I think this week would be fairly Herculean.”

Even if they succeed in the House, Republicans would still need at least nine Democratic votes to push a spending package through the Senate, which the GOP controls 51-49. Democrats seeking leverage are forcing that bill to require 60 votes for passage.

When the Senate approved a similar short-term spending bill in December 17, Democrats plus Maine independent Angus King voted to keep the government open. Seven of those Democrats face re-election in November in Trump-won states — including West Virginia, North Dakota and Montana, which have small numbers of minority voters.

Sen. Joe Manchin, a Democrat from West Virginia, said Tuesday he’ll vote for a short-term spending bill without a plan to assist the illegal immigrants.

“I think everyone has the empathy and compassion to want to help these young people who are stranded and we’re trying to find that, but shutting down the government isn’t going to help them,” Manchin said.

Democrats voting against that December bill included some senators — such as Cory Booker of New Jersey and Kamala Harris of California — who might seek the presidency in 2020 and would love support from their party’s liberal voters.

On the left, liberal groups are ramping up pressure on Democrats to resist any spending plan. Groups like MoveOn, United We Dream and CREDO shifted their focus from Republicans to Democrats earlier in the month, threatening primary challenges and public ridicule for Democrats unwilling to risk a government shutdown to save the program for illegal immigrants.

Meanwhile, the bipartisan group of senators continued work to build support for a plan to protect the “Dreamers” and toughen border security, including funds to start building Trump’s long-promised border wall.

Trump ended the Deferred Action for Childhood Arrivals, or DACA, late last year but gave Congress until March 5 to pass legislation extending the initiative created by President Barack Obama. It has protected around 800,000 illegal immigrants from the law.

Senate Majority Leader Mitch McConnell sought to highlight the later deadline, suggesting there was more time to work out a deal. A shutdown now would be “a manufactured crisis,” he argued.