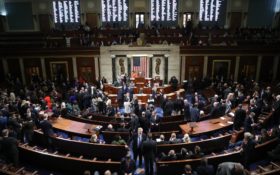 The Republican chairman of the powerful Georgia House Rules Committee died after suddenly collapsing at a lawmaker retreat last week.

The Towns County Sheriff’s Office requested that the Georgia Bureau of Investigation look into the death, GBI spokeswoman Nelly Miles said. “We should have more information available following an autopsy,” Miles said.

“His loss is devastating to the state of Georgia,” Gov. Brian Kemp said in a statement.

Powell, 67, was an attorney who served as mayor in the south Georgia city of Camilla for a decade before moving up to the state legislature in 2009. An expert on Georgia tax policy, he spearheaded legislation signed in 2018 requiring larger retailers to start charging sales tax for goods purchased online.

This year, he moved on from writing tax legislation as chairman of the Ways and Means committee, and assumed the chairmanship of the rules committee, where he helped decide which bills came up for a vote.

He was remembered by politicians on both sides of the aisle as a passionate advocate for Georgia.

Former Democratic gubernatorial candidate Stacey Abrams said: “Though Chairman Jay Powell and I stood on separate sides of the aisle, we worked together to advance good tax policy for Georgia and to support our local governments. He cared about community and getting good done.”

“Today is a sad day for the state of Georgia and a very hard day for me personally,” U.S. Rep. Doug Collins, a Georgia Republican who previously served in the state House, said in a statement.

“Jay always had my back even through the storms of politics, which means more than anything. He helped me as a new attorney and provided wise counsel over the years regarding our public service,” Collins added.

Funeral services for Powell were held Sunday at the First Baptist Church of Camilla.