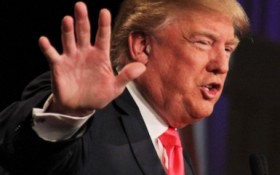 When it comes to real estate, few would argue that billionaire Donald Trump is the master of the deal. Now that the bombastic businessman is leading the Republican presidential race, the GOP establishment may be hatching a plan to teach Trump and his campaign about the kind of political deals they’re masters of — backroom handshakes and secret agreements.

There’s a second campaign for the Republican nomination that isn’t taking place at rallies, debates and ballot boxes. It’s being held in secret as the establishment candidates gear up for what’s being dubbed the “shadow convention.”

And the winner could ultimately be someone who loses nearly every primary.

With time running out for his rivals to stop Trump at the voting booth following his dominant performance in South Carolina, many of them are eyeing up this new strategy — stop Trump at the 2016 Republican National Convention in Cleveland.

And it all may be possible thanks to how delegates are awarded.

Winning states generates headlines, but the nomination is earned by collecting a majority of the delegates awarded in primaries and caucuses.

This year, most contests award delegates proportionally, based on each candidate’s share of the vote. Strategists for rival campaigns argue that could make it hard for Trump to build a big lead because even the second- and third-place finisher can win delegates in many states.

Right now, some GOP insiders say, the strategy is to try to prevent Trump from getting the majority of delegates he needs, and then advance a rival candidate at the Republican convention this summer.

That’s because the nomination isn’t formalized until the party’s presidential nominating convention, scheduled for July this year. The last time the Republican nomination wasn’t decided before the convention was 1976, when President Gerald Ford was nominated in the first round.

And if no one has a majority after the first round of voting, all bets are off. The delegates are released to vote for whoever they want – and the party will have its first truly open convention since 1948.

“Donald Trump would get smoked at an open convention,” an unnamed Southern state chairman told Politico.

Already, there are signs that the GOP establishment and super PACs are preparing for an open convention and multiple rounds of voting.

Politico reports that shady groups are quietly collecting personal information about the party members in each state eligible to become Republican delegates at the convention.

This data is available to anyone willing to pay the party for it; but rather than come clean and ask for it out in the open, the information is being purchased through third-party companies to hide the identities of the real buyers.

“There’s a bit of skullduggery,” the unnamed Southern state chairmen told Politico. “I suspect some super PACs are behind some of this.”

They want to know who’s who so they can call in favors, make promises and of course apply plenty of pressure.

Those super PACs are probably burning up the phone lines right now, along with reps from each campaign as candidates seek to line up delegates for the “shadow” phase of the convention.

Florida Sen. Marco Rubio is on record as suggesting he may actually be looking forward to the mess of an open convention.

“I don’t think it necessarily is negative,” Rubio told the Associated Press last week. “Whatever it is, we’re prepared for it.”

But former GOP candidate and Kentucky Sen. Rand Paul hopes the Republicans will do everything they can to avoid the disaster of an open convention.

“If the establishment tries to block an outsider from winning the nomination, there’ll be war within the party,” Paul recently warned in a radio interview. “And they’ll destroy the party.”