The GOP governor "race" the media isn't talking about... - The Horn News 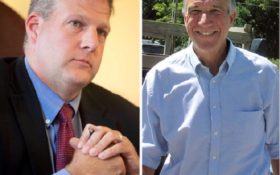 New Hampshire’s governor and his Vermont counterpart are talking about facing off on the race track.

New Hampshire Gov. Chris Sununu tweeted a challenge to fellow GOP Gov. Phil Scott of Vermont on Monday, saying that “rumor on the street is that you race cars.” Mentioning his most recent racing exploits – drag racing mini school buses on Saturday and losing in the final- Sununu then asked if Scott was “up for a race.”

Scott, who is one of Vermont’s most popular stock car racers, tweeted back:

You’re on, @GovChrisSununu. But, I don’t just race cars… I’ll let you pick the vehicle. pic.twitter.com/U76ucSOaPw

Sponsored: Blood pressure breakthrough: why chicken salad may be the secret to healthier numbers

Scott is in his 27th year of racing at Thunder Road in Barre, Vermont. Over that time he has won three track championships, most recently in 2002. Going into this season, Scott had won 29 feature races at Thunder Road, the most ever. On July 6, he won his 30th.

Before taking up stock car racing, Scott also raced motorcycles and snowmobiles. In a second tweet , he offered to stick to a bus and said he had a track-ready vehicle at his disposal.

There was no immediate word where or when the governors might race.

WARNING: Do NOT wash your hair until you read this [sponsored]

Sununu raced in a charity event Saturday at the New England Dragway, which raises awareness about the $1.7 billion in lottery proceeds that have gone to education since 1964.

Sununu spokesman Benjamin Vihstadt said “we expect to reach out to Governor Scott soon and look forward to setting something up in the near future.”