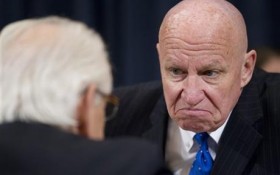 When the calendar turns to March in this year of the irate voter, the first wave of congressional Republicans will find out whether they have their very own Dave Brat waiting for them.

Brat was an underfunded, obscure college professor who shocked the political world in 2014 by ousting House Majority Leader Eric Cantor in what was supposed to be a no-contest Republican primary in Virginia. He now holds the Richmond-area seat and is one of the chamber’s more conservative and recalcitrant members.

Next month, GOP House members in a crescent curving from Texas to Illinois face the first congressional primaries in this incumbent-bashing, anti-establishment season of billionaire Donald Trump and Ted Cruz, the leading Republican presidential contenders.

Nearly all House members are expected to survive. But a few face contests being watched for possible upsets by conservative challengers. Among them: Ways and Means Committee Chairman Kevin Brady of Texas, and Reps. Martha Roby and Bradley Byrne of Alabama and John Shimkus of Illinois.

“It’s an open question whether we’ll see any serious candidates on the fringe right,” said Rob Engstrom, national political director of the U.S. Chamber of Commerce, which has started TV advertising backing Roby and Byrne and could engage in other House races. He said that March 1, when Alabama, Arkansas and Texas have the initial House primaries, is “a very important day to measure and determine what the score is.”

Mississippi House primaries are March 8, followed by Ohio and Illinois a week later. March 15 House contests in North Carolina have been delayed until June because of a dispute over redrawing district boundaries.

That edge has long made most officeholders impossible to topple. In 2014, just five sitting House members were defeated in party primaries. But 2016 poses a new test, with voters’ ill feelings toward Washington, fanned by Trump and Cruz, fueling conservatives’ hopes of defeating Republicans deemed too willing to cut deals.

“The frustration and anger that’s out there would indicate that this is the year you get beat from the right,” said Rep. Mark Meadows, R-N.C., like Brat a member of the rebellious House Freedom Caucus that last year helped push House Speaker John Boehner, R-Ohio, to resign from Congress. “If you don’t get beat this year, you will be golden for a long time.”

The surly mood has prompted the conservative Club for Growth to run hundreds of thousands of dollars’ worth of TV ads attacking Shimkus and Rep. Renee Ellmers in a now-delayed North Carolina race. Club commercials also back conservative Warren Davidson’s bid for Boehner’s vacant seat in western Ohio, which if successful would be a symbolic coup.

Brady is among 13 Texas GOP House incumbents facing primary opponents, challenges that are mostly considered long-shots. He’s represented his district north of Houston for two decades and last fall became chairman of the tax-writing Ways and Means Committee, a combination that makes him a household name locally and a national magnet for political contributions.

He also boasts endorsements from National Right to Life, the National Rifle Association and a sky-high 95 percent lifetime rating from the American Conservative Union. A primary defeat of a sitting Ways and Means chairman would be unprecedented, says Eric Ostermeier, research associate at the University of Minnesota’s Center for the Study of Politics and Governance.

“A lot of things get said during election season,” Brady recently emailed supporters, “but the facts about my dedication to conservative, limited government principles are clear.”

Toth says Brady isn’t conservative enough. He says anger toward establishment Republicans is “off the charts” and predicts he’ll be helped by the Texas’ March 1 presidential primary, the same day as the state’s congressional primaries.

“Seventy percent of the people who come to the polls here in Texas are going to be voting for either Trump or Cruz,” said Toth. “And they’re not going to pull the lever for Kevin Brady.”

“The congressman is taking it seriously,” Wilkerson says of his re-election race. “If I was advising him, that’s what I’d tell him.”

In a recent interview, Shimkus countered by citing his supporters.

“If you’re endorsed by the National Right to Life, by the NRA and the Farm Bureau, it’s hard for anybody to say you’re not representing the district,” he said.