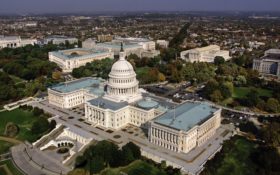 House Republicans early Thursday unveiled a new, stripped-down spending bill to prevent a government shutdown this weekend and allow quarreling lawmakers to punt most of their unfinished business into the new year.

The bill would stave off a government shutdown through Jan. 19 and permit lawmakers to head home for the holidays. It would delay battles over the budget and immigration into January, denying Democrats wins that they had hoped to score this year.

Failure to pass the measure would trigger a government shutdown at midnight Friday, which would amount to a political pratfall just after the GOP scored a major win on a landmark tax bill. With Republicans controlling Washington, they would not have anyone else to blame for a shutdown debacle.

White House counselor Kellyanne Conway said Thursday the “White House is committed to keeping the government open.” She added in an appearance on Fox News Channel’s “Fox & Friends” that “it would be a shame if the Democrats force a shutdown of the government in the 11th hour of trying to negotiate something.”

Despite the perilous situation, GOP leaders are scrambling to rally some frustrated Republicans behind the measure, particularly defense hawks who had hoped to enact record budget increases for the Pentagon this year. The measure does contain about $5 billion dollars for missile defense upgrades to respond to the threat from North Korea and to repair two destroyers damaged in accidents this year in the Pacific.

A vote is likely Thursday and Senate passage is expected to quickly follow.

The House may also vote on an $81 billion disaster aid package that’s a priority of the Texas and Florida delegations, but its fate is uncertain. The Senate would likely add to the measure and pass it next year. Republicans may unveil changes to the measure Thursday morning.

It also would temporarily extend an expiring overseas wiretapping program aimed at tracking terrorists. It has bipartisan backing, but stout conservatives and some liberals oppose it.

Thursday’s version is the third rewrite this week as GOP leaders have struggled to come up with a plan that would unite Republicans. Democratic leaders aren’t providing votes to pass the measure, saying Republicans are ignoring promises to protect so-called Dreamer immigrants brought to the country illegally as children. That issue, along with a hoped-for budget deal to undo a spending freeze on both the Pentagon and domestic agencies, would be put off until January.

An earlier plan favored by pro-Pentagon members of the influential Armed Services Committee would have combined the stopgap funding bill, called a continuing resolution, with a $658 billion Pentagon funding measure. But the idea is a nonstarter with the Senate, especially powerful Minority Leader Chuck Schumer, D-N.Y.

“The number of options is collapsing down,” said Rep. Frank Lucas, R-Okla. “I have faith that at the last possible moment, to paraphrase Churchill, when we have no other choice, we’ll do what we need to do.”

Includes a short-term, $2.1 billion fix for an expiring program that pays for veterans to seek care outside the Department of Veterans Affairs system. It also includes a short-term “patch” to make sure the states facing shortfalls from the Children’s Health Insurance Program, which pays for health care for 9 million children from low-income families, won’t have to purge children from the program.

Meanwhile, the $81 billion disaster aid bill faced a potential separate vote of its own, but was at risk of languishing because of opposition among some conservatives upset about its cost. Senate action on that bill wouldn’t come until next year anyway.

Regardless of how the crisis of the moment will be solved, most of the many items on Capitol Hill’s list of unfinished business are going to be pushed into next year.

Hopes for a bipartisan budget deal to sharply increase spending for both the Pentagon and domestic agencies appeared dead for the year and Democrats were rebuffed in their demands for protections for young immigrants brought to the U.S. illegally as children. There’s significant bipartisan sympathy for these immigrants, but battles over GOP demands for President Donald Trump’s border wall and additional funding for immigration agents are proving difficult to resolve.

On Wednesday, Sens. Lamar Alexander, R-Tenn., and Susan Collins, R-Maine, announced Wednesday that they would not seek to add the insurance subsidies, which are designed to stabilize the Affordable Care Act’s markets. The tax bill repeals the requirement that individuals purchase insurance.

Trying to combine the health measure with the spending bill was a demand of Collins when President Donald Trump and Senate GOP leaders secured her vote for the party’s tax cut measure. But House conservatives strongly opposed the move.

House Republicans weren’t part of that deal, and with the tax vote over, it became plain that Senate leaders were not able to deliver for her.