GOP debate tonight: Here's what to watch for! - The Horn News 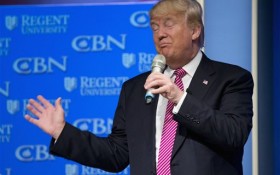 Republicans are heading into their only debate in the campaign for the 11-state voting extravaganza of Super Tuesday and the only one of the season steered to a Spanish-speaking as well as English-speaking audience, with CNN and Telemundo as partners.

Some things to watch Thursday night:

Does Marco Rubio take it to Donald Trump, the front-runner who’s getting hard to stop? Or mix it up with Ted Cruz, the one he might want to try to put away before making the nomination race essentially one on one? It’s a question he’s got to answer really soon.

Trump’s pattern through the campaign has been to lay off rivals until they pick a fight with him — then to go nuclear against them.

He’s been merciless in attacking Cruz, and that seems to have taken a toll on the Texas senator. But Rubio? “So far he’s been very nice and I think I’ve been very nice to him,” Trump said Wednesday.

But he quickly added that probably won’t last.

The Florida senator had an untroubled debate last time, after a disastrous one in New Hampshire when his robotic repetition of an anti-Obama talking point earned him ridicule and, by his own reading after the fact, contributed to a poor performance in that primary.

He’s got a head of steam again, after finishing second in South Carolina and Nevada. But with so much on the line now, his every word and gesture are going to be under the microscope.

What will he say on the subject this time, or any subject? And does it even matter? Trump’s supporters by and large seem forgiving of his rhetorical trespasses. And Jeb Bush’s withdrawal from the race takes one pointed critic of Trump off the stage.

The border-state debate, with its Hispanic element, is certain to put his provocative plans for a massive border wall and mass deportation under scrutiny.

Here’s another safe bet: Trump did well with Hispanic voters in the Nevada caucuses — that is, the limited number of Latinos who took part — and he will be in-your-face about that.

WHY AM I HERE?

Not for the first time, Ohio Gov. John Kasich and retired brain surgeon Ben Carson will be looking to establish their viability in a contest that is getting away from them. Kasich, in particular, has earned high marks for some of his debate performances — and he finished second in New Hampshire. But both are trailing nationally as crucial votes approach and pressure to distill the field grows.