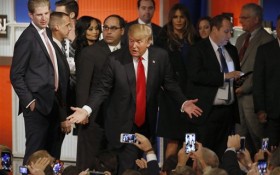 It was the least watched of the four debates, but it still set records.

An estimated 13.5 million people watched the fourth Republican presidential debate of the season, making it the most-watched program in Fox Business Network’s history.

Focused primarily on economic issues, it last among the GOP debates, behind the 14 million who watched the third debate on CNBC. Before Tuesday’s debate, Fox Business Network has never before reached as many as 1 million viewers for an event.

The debate was a more sedate affair than the first three, after Republicans complained about questioning during the CNBC debate.