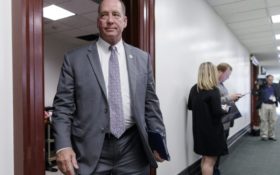 Republican Rep. Ted Yoho of Florida announced Tuesday that he will not seek another term, saying he never meant to spend more than eight years in Congress.

Yoho, who aligned himself with the Tea Party faction of the Republican Party and has been a fierce supporter of President Donald Trump, joins at least 27 House Republicans in announcing their departures from the U.S. House.

Of those, 23 aren’t seeking reelection, while three have resigned and already left Congress. And one — California Rep. Duncan Hunter — has said he is resigning and will leave the House shortly after the holidays.

Yoho broke the news in a letter to supporters on Tuesday, reminding them that he had pledged to serve just four terms.

“I truly believe a person’s word is their bond and should live up to their word,” he said. “I also meant that after eight years I would come home and pass the baton to a new generation.”

Yoho defeated a longtime incumbent in the Republican primary in 2012 to win the Third District seat, representing Gainesville and a swath of northern Florida. At one time, he vied for the Speaker of the U.S. House at a time of disenchantment with former House Speaker John Boehner.

Yoho’s retirement comes amid growing strength among Democrats in many suburban districts across the country, although Yoho’s district was widely considered safe Republican territory for now.

Nevertheless, Democrats characterized Yoho’s retirement as a sign that House Republicans may be questioning whether they can win back the House majority in next year’s elections, particularly in a turbulent year when impeachment proceedings are front and center.

“Republicans in safe seats don’t usually retire if they think their party is going to win back the majority,” said Avery Jaffe, a spokesman for the Democratic Congressional Campaign Committee.