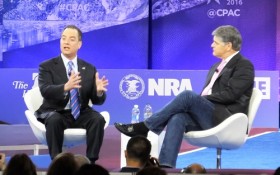 While he called the prospect “very unlikely” and tried to tamp down the possibility, Republican National Committee Chair Reince Priebus today wouldn’t rule out that the GOP presidential race would end in a brokered convention.

Priebus spoke at the Conservative Political Action Conference (CPAC), the largest gathering of conservative activists in America. His discussion was moderated by television personality Sean Hannity.

In subsequent rounds of voting, delegates are allowed to switch their allegiance to other candidates, and some Republicans are concerned that the strategy could be used to deny Donald Trump the nomination.

Priebus said he expects that, ultimately, “the people are going to decide” who gets the GOP nod. But he still put the odds of a brokered convention at between 10%-15%.

But it sounds like Priebus, who has pledged to stay neutral in the nomination, is hoping it won’t come to that.

“It’s a strategy… that people can use,” he said. “But I’d suggest it’s better to win races and earn delegates.”