Good work if you can get it! Apple CEO nabs million-dollar raise - The Horn News 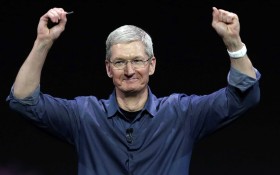 Apple CEO Tim Cook got a raise of more than $1 million last year, though he didn’t make as much as his top lieutenants.

The tech company says in a filing that Cook’s total pay was nearly $10.3 million, including $2 million salary, an $8 million bonus and $209,000 for private security. Apple paid five senior vice presidents more than $25 million apiece, including stock grants worth $20 million.

Cook hasn’t received stock in recent years. He was given restricted grants worth $384 million in 2011, when he became CEO.

Apple earned a record $53 billion profit on sales of $233.7 billion in the fiscal year ending in September. Its stock rose 15 percent during that period, although shares have sagged recently amid worries about Apple’s ability to keep growing.