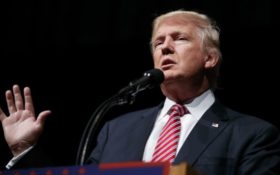 Since the election of President-elect Donald Trump, the economy has been booming with optimism and it looks like it’s only up from here!

American consumers are spending like never before and small business owners are anxious and excited for the new year.

The Conference Board said Tuesday that its consumer confidence index climbed to 113.7 in December, up from 109.4 in November and the highest since it reached 114 in August 2001. It’s another sign consumers are confident in the aftermath of a divisive election campaign.

The index measures consumers’ assessment of current conditions, which dipped from November but was still very positive, and their expectations for the future, which hit a 13-year high.

Trump acknowledged the incredible surge in a tweet Monday:

The U.S. Consumer Confidence Index for December surged nearly four points to 113.7, THE HIGHEST LEVEL IN MORE THAN 15 YEARS! Thanks Donald!

Lynn Franco, director of economic indicators at the Conference Board, said the “post-election surge in optimism” was strongest among older Americans.

Economists monitor consumers’ mood closely because their spending accounts for about 70 percent of U.S. economic output.

“The election of Donald Trump has raised household expectations for the economy to a very high level,” Stephen Stanley, chief economist at Amherst Pierpont Securities, wrote in a research note. “It remains to be seen whether Trump can deliver,” but the burst in confidence could drive consumer spending higher.

Trump recognized his contribution to the booming economy:

The world was gloomy before I won – there was no hope. Now the market is up nearly 10% and Christmas spending is over a trillion dollars!

And small business owners are cheering about the increased spending by Americans and the positive changes they look forward to from a Trump economy.

Dean Bingham says he’s cautiously optimistic because business picked up at his auto repair shop after the election — people who had put off fixing their cars have decided it’s time to get them serviced.

“Over the last month, customers have been coming in with optimism that they didn’t have the last few years,” says Bingham, owner of a Mr. Transmission/Milex franchise in Greenville, South Carolina.

The shop has been so busy Bingham’s looking to hire a seventh employee to help out in the front while he works on cars.

While many business owners are more confident because their revenue looks to increase in 2017 due to the overall improving economy, they’re also optimistic because they expect Trump to deliver on promises to lower taxes and roll back regulations including parts of the health care law.

Business owners were considerably more optimistic about 2017 in a survey taken shortly after the election. Forty-six percent of the 600 questioned in the Wells Fargo survey said the operating environment for their companies would improve next year; that compares to 30 percent two years ago, after the last congressional elections. Just over half the owners said actions that Trump and Congress will take next year will make their companies better off.

“The election does give me more optimism than I would have had otherwise,” says Kurt Steckel, CEO of Bison Analytics, which does software consulting. Bison’s inquiries from prospective clients, small companies that are looking to expand, have nearly doubled since the election.

Steckel is also upbeat about an overhaul of the health care law. He says the cost of his small group insurance rose sharply when the law went into effect, and he had to stop offering coverage to his 10 staffers. He says if insurance were to become more affordable, he’d restore coverage.