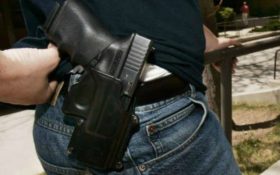 The war on cops is spiraling out of control, but not all hope is lost. In Florida, one heroic citizen proved there are good citizens still willing to do what’s right for our men and women in blue.

A routine traffic stop on Interstate 75 in Estero, Florida Monday morning resulted in a high speed chase that ended in a deadly confrontation between the criminal suspect and a police officer.

This time, the criminal suspect ended up dead. But without an armed Good Samaritan, the result could have been much different.

It all began around 9:30 a.m. when a Lee County deputy was led on a car chase after the suspect refused to pull over. According to witnesses, after reaching an on-ramp the suspect got out of his car and lunged at the officer, Deputy Dean Bardes, a 12-year veteran of the Lee County Sheriff’s Office.

The suspect pinned the officer to the ground and was striking him repeatedly.

Luckily, a still-unidentified armed citizen witnessed the attack and — after several warnings — shot the suspected criminal three times, killing him.

“He just kept beating him and beating him, throwing him to the ground and punching him in all different directions,” Shana Holditch told WZVN.

Bardes was hospitalized briefly and has since been released. The suspect later died, and authorities have said the investigation is continuing.