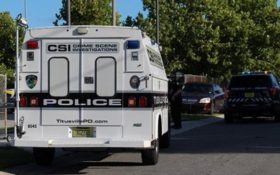 A good guy with a gun saved the day when an armed suspect opened fire at a Florida park filled with children enjoying their back-to-school cookout on Saturday.

According to a news release, the suspect was engaged in a fist fight with another person at the park prior, and left, then came back minutes later and began firing.

The suspect was then shot by a bystander, who was lawfully carrying his firearm.

“We are extremely grateful that nobody else was injured in this incident,” Deputy Chief Todd Hutchinson said in a statement. “This suspect opened fire at a crowded public park. This could have been so much worse.”

The gunman was airlifted to a local hospital and was suffering from life threatening injuries during the shootout, and luckily, no one else was hurt.

A DJ who family organized the event explained that he was standing underneath the pavilion was he heard the gunfire. “I was like, who lit firecrackers? I turned around and just said, ‘Oh no, he’s got a gun, he’s got a gun.'”

The families partaking in the event we very thankful to have the good guy in the right place, at the right time to save the day.

“This suspect opened fire at a crowded public park, this could have been so much worse.”

The lives of over 100 individuals was saved by the bystander who lawfully carried his gun, and police explained that they do not plan to press charges because he acted “within the law based on preliminary investigation.”