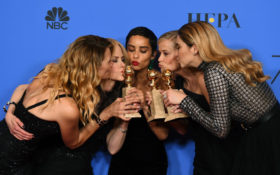 “Time’s Up” on more than just sexual harassment — it’s time for the juiciest secret from the political insanity inside the 75th Golden Globes to be revealed.

On Sunday night, Hollywood actresses and actors wore all black and one-by-one took the stage to declare each-other champions of the victims of sexual abuse in their industry.

But there’s a big, dark secret they were all hiding… and the truth is revealing. Not a single one of the actual victims were even invited to the ceremony that was supposed to honor them.

Notably, some guests were missing from the Golden Globes that was all about the victims of Hollywood creeps… the very women who suffered.

Asia Argento, Rose McGowan, Rosanna Arquette and Mira Sorvino, and the other people that spoke out about top Democratic donor Harvey Weinstein gathered together on Twitter to reveal that no one bothered to invite to the big event… which was all about speaking out.

Just a question… did anyone think to actually ask @rosemcgowan @AsiaArgento @albinokid or @terrycrews to present/host/attend the #GoldenGlobes or are we all just thinking a change in clothing color makes it all better? Their voices should have been HEARD not seen tonight.

I can only speak for myself but not only I wasn’t invited to the #GoldenGlobes: nobody asked my opinion about #TIMESUP or to sign the letter. I support @TIMESUPNOW even though I was excluded from it. Guess I am not POWERFUL or HOLLYWOOD enough. Proud to work behind the scenes✊️ https://t.co/Wemz2qd7gw

And not one of those fancy people wearing black to honor our rapes would have lifted a finger had it not been so. I have no time for Hollywood fakery, but you I love, .@AsiaArgento #RoseArmy https://t.co/9e0938y5sI

No we weren’t invited. Annabella ,Daryl ,Mira none of us were .

It would have been too much of a downer… an embarrassment. Victims aren’t glamorous enough.

Once again Hollywood liberal celebs are giving themselves a round of applause for putting an end to sexual harassment. But, did they forget… they’re the ones that are to blame for the disturbing epidemic?

So why the snub? It’s simple, really.

Inviting the victims would mean drawing attention away from themselves.

We all know that A-list Hollywood celebs could never have that happen.