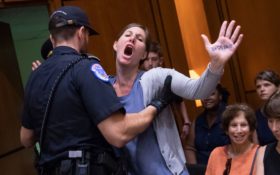 The Republican National Committee released another new advertisement campaign on Wednesday attacking the Democratic Party for their recent unhinged attacks — and it’s something every American voter needs to see.

The ad was released as the Brett Kavanaugh confirmation hearings take place, after approximately 143 erratic and chaotic liberal protesters have been arrested early in the proceedings.

But the viral video shows how long this “crazy” behavior has been going on — and not surprisingly, it features House Minority Leader Nancy Pelosi and Rep. Maxine Watersmaking extremist comments that encourage their supporters to become violent in the streets.

The ad begins with a black screen and white lettering that spelled out, “Crazytown?”

Senator Cory Booker is featured in the campaign telling a crowd of liberals, “Please get up into the faces of some congress people.”

The ad highlighted a clip of Waters telling a crowd of Democrats “You see anybody from that cabinet in a restaurant, in a department store, at a gasoline station — you get out and you create a crowd!”

The unhinged and disruptive behavior of liberals at the Kavanaugh hearings are also featured, showcasing the arrests of these violent individuals.

Pelosi could also be heard in the ad telling Democrats, “I don’t know why there aren’t uprisings all over the country,” which is then followed by clips of violent alt-left activists destroying property and flipping trash cans along a street.

The final frame of the video features a note to Democrats stating, “The Left is Crazytown.”

The video serves as confirmation that the Democratic party has become completely unhinged — and Republicans are the only party that will be able to continue to successfully deliver to the American people.