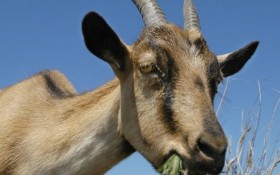 “Baaaaa-ack off!” say the goats!  According to the Associated Press, the U.S. Forest Service has temporarily closed a northern Idaho hiking trail over concerns about aggressive goats after one animal bit a hiker and others reportedly tried to head-butt or charge visitors.

Visitors to the trail have been offering food to the goats or even allowing them to eat from their hands, according to the Forest Service. That can cause the animals to behave aggressively in an attempt to get food from humans.

“The temporary closure is intended to allow time for the goats to find other sources of food beyond handouts provided by hikers and to reduce their willingness to approach humans,” Idaho Panhandle National Forests spokesman Jason Kirchner said in a news release.

There have been reports of goats trying to head-butt or charge hikers. One hiker was bitten by a goat in June and required multiple stitches, the Forest Service said.

Reports of charging goats have raised concern that someone could be gored. A hiker died from injuries after being gored in 2010 in Olympia National Park in Washington.

In a guest opinion published by the Daily Bee last year, former Fish and Game biologist Mary Terra-Berns said it is risky for hikers to feed goats or allow them to satisfy salt cravings by licking human skin.

“Feeding wild animals is dangerous and selfish behavior. It not only puts the individual providing the food in danger, it also puts everyone else in danger,” Terra-Berns wrote. “Feeding creates an expectation of salt or food from anyone that hikes to the top of the peak.”

The Forest Service said it has not scheduled a date to reopen Scotchman Peak Trail.