GMO labels? Not if THESE big companies have their way - The Horn News 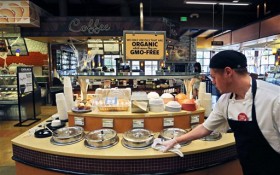 The food industry wants the labeling to be voluntary, and it hopes to get a provision in a massive spending bill that Republicans and Democrats want to wrap up this week. If that occurs, companies would not be forced to disclose whether their products contain genetically modified organisms, or GMOs.

The House passed similar legislation earlier this year, but the Senate has not yet acted. Even so, food companies and farm groups say Congress must step in before Vermont becomes the first state to require GMO labels next summer.

“It is imperative that Congress take action now to prevent a costly and confusing patchwork of state labeling laws from taking effect next year and spreading across the country,” a coalition of groups representing growers and the food industry said in a letter to House and Senate leaders.

The country’s largest food companies say genetically modified foods are safe and that labels would be misleading. Supporters of labeling counter that consumers have a right to know what’s in their foods, and Congress shouldn’t be trying to pre-empt the states.

The Food and Drug Administration has said GMOs are safe, and the federal government does not support mandatory labels.

“What’s at stake for farmers and consumers without action is that American farmers and food companies will be faced with uncertainty,” said Claire Parker of the Coalition for Safe Affordable Food, the group that wants Congress to step in.

Supporters of labeling are trying to fight the industry effort with an ad in the Washington area and in Vermont that reminds consumers about the FDA’s recent approval of genetically modified salmon, which would not be labeled.

“If your state wants to label GMOs, Congress is trying a year-end sneak attack to block your right to label,” the ad says.

Michigan Sen. Debbie Stabenow, the top Democrat on the Senate Agriculture Committee, said she thinks the issue is too controversial for the year-end spending bill, which lawmakers must pass before leaving for the holidays. She and North Dakota Sen. John Hoeven, a Republican, have been working to find a compromise.

“We have a lot of folks on our side of the aisle that are very opposed,” Stabenow said.

Advocates of labeling say people have a right to know what is in their food and criticize efforts to take away states’ ability to require the labels. They have supported several state efforts to require labeling, with the eventual goal of having a federal mandatory label set by the FDA.

“It’s about states having the right to do this,” said Andrew Kimbrell of the Center for Food Safety, the group behind the ad.

If passed, the industry-backed legislation would pre-empt any state labeling requirements. So far, Vermont is the only state set to require labeling. Its law would take effect in July 2016 if it survives a legal challenge from the food industry. Maine and Connecticut have also passed laws requiring labeling, but those measures don’t take effect unless neighboring states follow suit.

The legislation would also step up FDA oversight by requiring that any new genetically engineered products be reviewed by the agency before they can be sold. That process is now voluntary for most modified foods. It would also create a new certification process at the Agriculture Department for foods that are labeled free of GMOs.