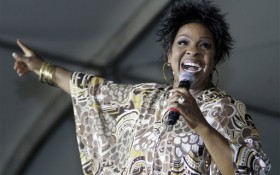 Police say an officer who pulled over soul singer Gladys Knight was treated to an impromptu rendition of “Happy Birthday.”

Officer Paul Rogerson was checking the driver’s license when the woman said she was with Gladys Knight on the way to a choir performance for The Church of Jesus Christ of Latter-day Saints. Knight is a Mormon convert, and Rogerson says she was speaking at the event.

Rogerson told the woman it was his birthday and Knight also got out of the car and sang to him.

Police say Rogerson let the driver go with a warning.

Jeanteil Livingston, a spokeswoman for Knight, says the singer lives in Las Vegas but was in Utah for the choir rehearsal.