Germany rejects US soldiers bid for asylum - The Horn News 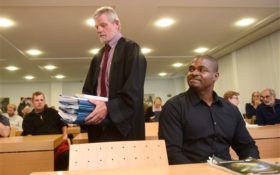 A Munich court has rejected a U.S. soldier’s asylum application in Germany, arguing that he hasn’t exhausted all avenues to leave the military.

Army Spc. Andre Shepherd deserted from his military base in southern Germany in 2007, claiming he wanted to avoid returning to Iraq where he feared being involved in war crimes.

The 39-year-old, who has permanent residency in Germany because he is married to a German woman, took his case to court after German authorities rejected the asylum bid.

The Munich administrative court noted in its ruling Thursday that the Apache helicopter mechanic had repeatedly re-enlisted with the U.S. military.

A spokesman for the U.S. Army in Europe couldn’t immediately comment on the case.