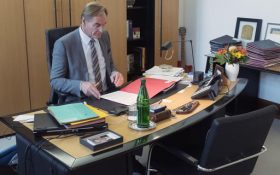 Jaber Albakr, a 22-year-old who had been granted asylum, was arrested Monday in Leipzig after three fellow Syrians tied him up and alerted police. He arrived in Germany early last year.

Interior Minister Thomas de Maiziere said Wednesday that “there was a check against security authorities’ data in 2015, but without any hits.” He added “it’s not clear when he was radicalized.”

Authorities believe the man had links to the Islamic State group.

De Maiziere said the Syrian captors’ “behavior deserves praise and recognition.” He responded to calls for them to be fast-tracked for asylum by saying that they already have it.