Germany pledges to join the fight against ISIS - The Horn News 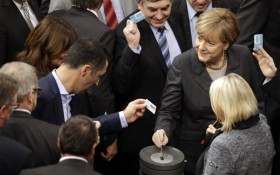 German lawmakers on Friday overwhelmingly approved a broad noncombat mission to aid the fight against Islamic State militants, including sending reconnaissance jets and a frigate following a call from France for support following last month’s deadly attacks in Paris.

Parliament voted 445 in support of the plan and 146 against with seven abstentions.

“The goal… is to fight and contain IS, and destroy their safe havens and their ability to lead worldwide terror operations,” Defense Minister Ursula von der Leyen told reporters Thursday in Berlin before heading to Ankara for talks with her Turkish counterpart about logistics.

She also met with Turkish President Recep Tayyip Erdogan to talk about stationing German troops there and other aspects of the deployment, the Defense Ministry said Friday.

The mission comes after Chancellor Angela Merkel agreed to honor a request from France to provide support for its operations against IS in Syria. In all, Germany plans to send up to six Tornado reconnaissance planes and a tanker aircraft, as well as the frigate to help protect the French aircraft carrier, but won’t actively engage in combat.

A maximum contingent of 1,200 soldiers was also approved, serving as support troops in Turkey and elsewhere, including at headquarters operations in Qatar and Kuwait. The mission is open-ended, but needs annual Parliamentary approval.

French President Francois Hollande on Friday visited the Charles de Gaulle, France’s only aircraft carrier, which was dispatched to the region a week before the Nov. 13 attacks that killed 130 people and wounded hundreds in Paris. Those attacks were claimed by IS.

The French aircraft carrier has been launching raids against Islamic State bases as part of the U.S.-led coalition’s strikes against the group.

British jets flew their first missions as part of the coalition’s anti-IS efforts on Thursday, striking oil fields in eastern Syria that help finance IS.

In the meantime, in an effort to create a united front on Syria ahead of peace talks early next year, Saudi Arabia will host Syrian opposition groups and many of the main rebel factions seeking to oust Syrian President Bashar Assad.

Saudi Arabia is a main backer of the opposition groups and next week’s three-day meeting is the first it has hosted since the outbreak of the nearly five-year war.

Many of the groups had rejected any negotiations with Damascus as long as Assad was in power. Now they will attempt to join a process that the United States and its allies say must eventually lead to Assad’s removal — but with no timetable for it.

A peace plan agreed to last month in Vienna by 17 nations sets a Jan. 1 deadline for the start of negotiations between Assad’s government and opposition groups. The plan says nothing about Assad’s future, but states “free and fair elections would be held pursuant to the new constitution within 18 months.”

Among the nations that took part in the Vienna meeting were the United States, Russia, Iran, Saudi Arabia, Qatar and Turkey. Russia and Iran have been Assad’s strongest supporters since the crisis began in March 2011, while Saudi Arabia and Turkey have backed factions trying to remove the Syrian president from power.

Iran has denounced the meeting, saying it will add new obstacles instead of helping to stop the fighting.