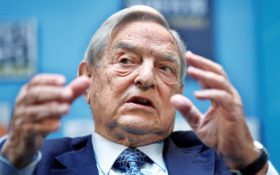 As Mark Twain might have said, Suppose you’re a loser and suppose you’re George Soros – but then I repeat myself.

As The Horn News reported, Soros and his allies spent $3 million on California’s country district attorneys races this year.

His candidates promised to make it harder for police to do their jobs by prosecuting them at the slightest allegation of “misconduct,” to let criminals go without bail – even to close a prison a year. Corporate titans from Facebook, Netflix, Instagram, and Steve Jobs’ widow put their millions behind the effort.

Now the votes are in, and Soros is licking his wounds.

In the state capital, challenger Noah Phillips admitted Soros’ people literally wrote his TV ads. But he went down in flames against incumbent Anne Marie Schubert.

“This is a good day for the people. You can’t buy an election in the county of Sacramento,” Schubert said.

Soros’ most humiliating defeat came in the very place his backers plotted to overthrow the justice system in the first place.

The Democracy Alliance, a group of shadowy megadonors co-founded by Soros, promised to focus on prosecutor races at its November 2017 meeting at the posh La Costa Resort near San Diego.

His candidate, Genevieve Jones-Wright should know; she was there.

Soros knew he was beaten and pulled his money out a week before the election – but she pouted all night and refused to admit defeat, anyway…just like Hillary Clinton.

Early results still haven't changed since first reports for San Diego County DA race. Despite the deficit, reps from @JonesWright4DA's campaign say she has not considered conceding and expects to have final tally tomorrow morning.

And the hits just kept coming:

He had two wins, in San Bernardino and Contra Cosa County – by the skin of his teeth.

The embarrassing setbacks come just weeks after Soros lost the most expensive D.A. race in Oregon history. Kevin Barton became Washington County prosecutor in a blowout, winning 69 percent of the vote versus 31% for Soros-backed candidate Max Wall, who received $389,000 in donations from the Soros syndicate.

They exposed the corrupting influence George Soros has on elections by backing radical left-wing candidates, and they won big.

Why was Soros so fixated on county D.A. races? Because they control who gets prosecuted and who doesn’t.

“By supporting the election of like-minded district attorneys, the network of national and local activists and funders hope to secure many of the sentencing and bail policies they have struggled to realize through laws or ballot initiatives,” admits “The Marshall Project,” a group funded by Soros’ Open Society Foundation. They want officials to ignore the law, just like Barack Obama did.

In a post-mortem, The Los Angeles Times wrote that Soros and his minions “appeared to underestimate the deeply rooted support that law enforcement enjoys in a state as politically blue as California.”

Yeah, California voters respect police who keep them safe from its exploding criminal population. That would only surprise a billionaire, or a liberal journalist.

“It’s hard to say if this is a rejection of Soros candidates or if this is just par for the course” of incumbents staying in office said Michele Hanisee, head of a union of Los Angeles County prosecutors. “But I think a larger policy issue needs to be asked…‘Do we want big outside donors funding elections?’”

Now his record is 15 out of 26, still better than half – and his allies plan to go full-speed ahead in their effort to buy the justice system.

“The 2018 campaigns were just the beginning,” said Anne Irwin, the head of a nonprofit group aligned with Soros. “We’ll continue to educate voters about the power of their district attorney, and we’ll get ready for 2020 and 2022.”

Rest assured George Soros is digging in for a long war on the American justice system. Patriots had better get ready, too.