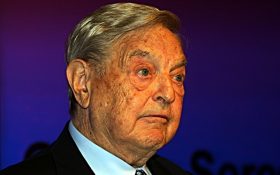 George Soros and his minions are spending millions of dollars in local district attorney races – so that the newly elected D.A.s will prosecute the police and let criminals go free. He leads a group of deep-pocketed liberals who have teamed up to support soft-on-crime prosecutors around the country.

The consortium of super-rich donors has flooded California D.A. races with so much campaign cash that most honest prosecutors can’t possibly match it – all in an effort to buy the U.S. justice system.

Soros has spent $3 million in the last week – $1.5 million in one county alone.

“In San Diego County, the groups back a deputy public defender who spent her legal career trying to keep the accused out of jail, not lock them up,” reported the Los Angeles Times.

Springing crooks from prison is a defense attorney’s job, not a prosecutor’s. But Geneviéve Jones-Wright won Soros’ approval – and more importantly, his cash – by promising to crack down on alleged “police misconduct.”

Getting prosecutors to turn on the Thin Blue Line is a major part of Soros’ effort, the Times reports.

Another of his donation recipients, Noah Phillips of Sacramento County, got more than cash: He freely admits that Soros’ team wrote the entire script for his TV commercial criticizing police for killing a suspect in the line of duty.

The cop-bashing ad also plays the race card by lingering on the face of a young African American boy wearing a hoodie.

The hostile environment could make police think twice before defending themselves – when a moment’s hesitation could get them killed.

Needless to say, Black Lives Matter and the ACLU back the Soros-funded candidates to the hilt – and they want something specific in return once these candidates win the election.

The Soros slate of candidates promises to go easy on crime – not to prosecute some people at all, not to send some guilty criminals to jail, and to put other predators out on the streets.

“We should be closing a prison a year in California,” Jones-Wright told a candidate’s forum. “By closing prisons, we will not have to incarcerate people.”

Really? That’s like saying if we close all hospitals, we won’t have any sick people.

Other Soros-backed candidates – like Philadelphia’s D.A. Larry Krasner and Houston’s Kim Ogg – either fired prosecutors by the dozens or announced they weren’t going to prosecute people for certain crimes.

“It is a very, very slippery slope when you are asking the elected official to ignore laws they have sworn to uphold,” said Michele Hanisee, president of a group of L.A. county prosecutors trying to preserve justice from Soros and his avalanche of cash.

Another cop-hating backer is Shaun King, who is part of the effort through his Real Justice PAC. Earlier this month, King falsely accused a Texas police officer of kidnapping and raping a black woman – making the phony allegation go viral online.

When the police released the full body cam footage, which shows the officer treating her with respect and acting by the book, her attorney had to admit it “directly conflicts” with King’s story.

The Democracy Alliance, Soros’ shadowy group of leftist millionaires, have promised to target D.A. races – so their fellow left-wingers would get off easy, and Republicans and conservatives could be sent up the river.

Even when criminals are guilty, they may not go to jail. Jones-Wright announced, if she’s elected, she won’t demand bail…because it discriminates against poor people!

She also promised not to prosecute people for sleeping on sidewalks or loitering, because that discriminates against the homeless.

The nine Soros-backed candidates would prosecute the police for defending themselves, let criminals out of jail without bail, and close down the prisons.

And guess where the crooks go when the prisons are closed down?

George Soros has spent $16 million since 2014 trying to purchase the justice system, one county office at a time – and it’s working. He’s won 13 of the 17 races he’s been involved in.

Decent people have to pay attention and get tough on criminals, not the police.

After one of these D.A.s beats him, maybe they should investigate Soros.